When we think of Utah, images of the Wasatch Mountains, the Great Salt Lake, and orange-rusted landscapes of southern Utah occupy the mind. As we take in these very Utah landscapes, we may encounter hidden gems. Andrew Hays Gorey would be one of those buried treasures.

Gorey was born on June 6, 1921, in Salt Lake City and as his Salt Lake Tribune obituary notes, he found his calling to journalism at the age of 5 when he wrote a story about the death of a pet. The reporting bug inspired an extensive career that stretched from copy boy at a local newspaper to editor of The Utah Chronicle, a political correspondent for Time, and defender of the free press. 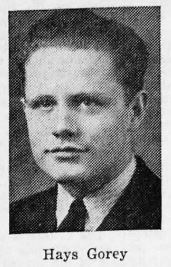 Gorey understood how to speak to his local community about national issues. Three days after the attack on Pearl Harbor, he penned a column where he encouraged his university audience to contribute to the war effort. “The sacrifices we will be called upon to make will be made cheerfully. We know what the goal is; we recognize the intrinsic worth of that goal enough to want to attain it, and to help in the struggle to attain it,” he wrote for the Utah Chronicle on December 10, 1941.

He didn’t skirt the issues, even in his early college days. “It is indeed gratifying that these teethless [sic] organs of the student government system at last came in for a little much-deserved adverse criticism; their past activity, or rather, inactivity, more than warrants condemnation,” he wrote in The Utah Chronicle on November 6, 1941, criticizing the inefficiency of overabundant student councils monitoring school activities. As a columnist at the University of Utah paper, he made his thoughts clear and opinions direct.

The following week on November 11, 1941, in the same publication he addressed those who had called him a “radical” and a “communist” for his scorching criticism, but he never walked his opinion of the student government back. Gorey cherished the First Amendment. His column defending the free speech rights of former Senator Rush Holt—an unashamed isolationist—in The Utah Chronicle on November 19 rang true with his principles.

While he was at Nieman Reports he asked the question on whether balanced and relevant news was being produced beyond eloquent writing and eye-catching headlines. “We must worry not only about what a thorough analysis of the printed article will show we did say—but what the general impression of our entire presentation, headline, play, and article had on the reader,” Gorey wrote in January 1950 in his article, “Making Makeup Matter.”

In April 2011 The Washington Post reported in its obituary that Gorey had won a Nieman Fellowship to Harvard in 1949 and after his stint at The Salt Lake Tribune he landed a job as national correspondent at Time magazine in 1965. “Gorey was best known nationally for his work at Time [sic] from 1965 to 1991,” wrote Jan Gardner from Nieman Reports, the same publication where Gorey added his two cents when he was alive.

In a C-SPAN interview on January 13, 1984, Gorey defended the existence of the free press and made no apologies for an adversarial and engaged journalistic body. “The interest of the public demands that the press be aggressive, be alert, be skeptical, be cynical if you will and it doesn’t matter if it’s a Republican in the White House or a Democrat, we should be equally vigilant,” he said during the hourlong discussion.

Gorey had shown years prior how tenacious the press could be when he interviewed Special Prosecutor Leon Jaworski in November 1973 for Time shortly after the Saturday Night Massacre where President Richard Nixon fired special prosecutor Archibald Cox. He pressed for answers on behalf of the American people amid a constitutional crisis.

His columns, editorials and interviews garnered the respect of his colleagues. He was considered a “journalist’s journalist,” by former Salt Lake Tribune publisher Jack Gallivan, as reported by Paul Rolly in The Salt Lake Tribune on April 5, 2011.

Gorey ran the journalistic gamut. He was a University of Utah alumnus who started off as a copy boy and ended up doing a great many things in the service of muckraking.

Donald Aguirre is a senior at The University of Utah. He is a journalism student majoring in communication and is the owner & creator of the blog, The Mockery Times.