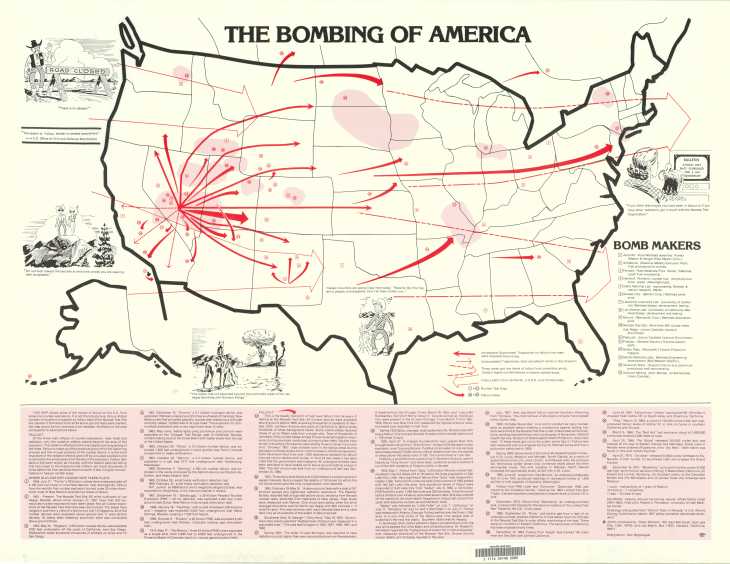 This map shows the hot spots of affected areas from nuclear fallout caused by the bomb tests at the Nevada Test Site. Used by permission, Special Collections, J. Willard Marriott Library, The University of Utah.

In the 1950s and 1960s, the Atomic Energy Commission (AEC) ordered the United States government to conduct nuclear tests in the western states. This resulted in numerous people living around this area getting exposed to nuclear fallout and contracting some form of cancer. These people were later referred to as the Downwinders. At the same time of these tests, the University of Utah received a $3 million grant from the AEC to put toward nuclear research. This article will give a brief history of the AEC, examine the university’s role in the tests, and discuss the legacy of the Downwinders today.

On January 6, 1961, the Daily Utah Chronicle wrote a story about the AEC giving Utah universities grant money for nuclear research. This grant was from the Atomic Energy Commission. They awarded the University of Utah, Utah State, and Brigham Young University a total of $4 million over a 10-year period for research in atomic studies. The University of Utah received the largest chunk at $3,552,528.

On February 3, 1961, an article in the Daily Utah Chronicle announced the addition of a new medical center on campus. This housed a research facility from the Atomic Energy Commission which included dog kennels for beagles as their nuclear test subjects. A reporter wrote a story in the same issue of the Chronicle, predicting the 1960s to be a decade of science with the grant from the AEC as well as Time magazine naming 15 prominent scientists its “Men of the Year.”

The University of Utah’s Marriott Library recently conducted interviews with many of the surviving Downwinders. Justin Sorenson interviewed a man named Joseph Ward Spendlove. Spendlove was born in Delta, Utah, in 1942 and lived there until 1958. Many members of his community began to get cancer around that time which eventually took the life of his mother. Today he is living with prostate cancer while taking care of his brother, who has a degenerative nerve disease. Doctors are unsure if it is related to the nuclear testing. To this day, Spendlove still attends his high school class reunions where the topic of conversation is almost always centered around who has most recently died of cancer.

Ilene Hacker is another living Downwinder. She was raised in St. George, Utah, through the 1960s. Hacker’s father died from pancreatic cancer when he was just 48 years old. She and 13 of her close friends from high school were diagnosed with Hashimoto’s disease. Despite living in the crossfire of nuclear toxicity and being well traveled, Hacker still feels that she is living in the greatest place on earth. With that, she also feels a total distrust of the government.

The nuclear tests done in the western US have had a tremendous impact on the people who inhabit the region. By the firsthand accounts of modern Downwinders, we see this is an issue that persists even today. Ilene Hacker’s distrust in the government is not unwarranted and even members of Congress agree. The fact that so many people died because of nearby nuclear testing provoked a bill in the 1990s by Utah Senator Orrin Hatch to give compensation to these victims. There has been a recent movement to expand the compensation to victims throughout all of Utah, as well as neighboring states like Idaho and Montana and even Guam. For all of those heavily affected, compensation would range from $50,000-$150,000 — which, as the leader of this movement Preston Truman explains — would not even cover the cost of one chemotherapy treatment.

Maddie Colosimo is a senior at the University of Utah and is majoring in communication with an emphasis in strategic communication and minoring in art history.

Davidson, Lee. “Utahns who say family members died from cancer because of radioactive fallout would be eligible for $150K under new bill,” Salt Lake Tribune, July 6, 2018.

JCordes, “Scientific Discoveries of the 1960s.”