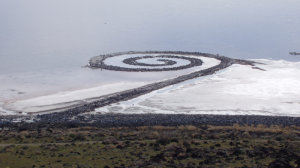 Photograph of the Spiral Jetty at Rozel Point by Soren Harward.

The Spiral Jetty is a man-made, sculpted work of art by artist Robert Smithson. It is located on the northeastern shore of the Great Salt Lake, near the Golden Spike National Historic Site. Smithson used black basalt rocks and earth from the area to create the Spiral Jetty in 1970. The Jetty is in the shape of a spiral coil that is 1,500 feet long and 15 feet wide, and it took six days to create. It reaches out counter-clockwise into the red waters of the area. The Spiral Jetty was acquired by Dia Art Foundation, based in New York, as a gift from Smithson’s estate in 1999. It has worked diligently to preserve the Spiral Jetty since the acquisition, according to the foundation’s Web site.

The Spiral Jetty is a highly regarded and well-respected work of art that tourists and art enthusiasts alike can enjoy and appreciate. In 1972, The New Yorker referred to it as Smithson’s “most ambitious [project] to date.” The Jetty is only visible when the water level of the Great Salt Lake is low enough, giving the Jetty an air of rarity and mystique among those who seek it. The Jetty was not visible for many years in the 1980s, resurfacing briefly in the 1990s only to disappear once again. Today, the Jetty is entirely visible.

Because the Spiral Jetty exists within a natural, outdoor setting, it has been the center of some controversy between environmentalists, art enthusiasts and oil drillers. An editorial published in The Free Lance-Star in 1981 referred to the Jetty as a “curling path of rock bulldozed into Utah’s Great Salt Lake,” addressing concerns over environmentally destructive works of art such as the Jetty. There has been some controversy regarding the Spiral Jetty and mining. The New York Times has published articles discussing how art enthusiasts believe the Jetty should be left alone, while mining and drilling proponents think that the land surrounding the Spiral Jetty should be fair game for Utah’s mining industry. In one article, John Harja, director of the Utah Governor‘s Public Lands Policy Coordination Office, said, “Like everywhere in the West, the lake is being discovered and people want to protect it and people want to use it.” 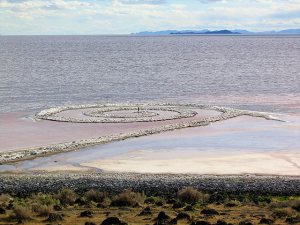 Photograph of the Spiral Jetty by Michael David Murphy.

The Jetty has also served as a great location for amateur, nature and art photographers due to its unique design and all-natural landscape. Of the included photographs, two were taken at Rozel Point, which is slightly northeast of the Jetty and a popular spot for photographers to capture the Jetty in its entirety. The aerial photograph was featured on a New Jersey public television (NJN) program titled, “State of the Arts” for their Forces of Nature segment, demonstrating that interest in the Jetty is not only at a local level, but a national one as well. Many pictures of the Jetty have been taken over the years, some while the Jetty was fully exposed, others while it was barely visible above the waters of the Great Salt Lake. According to the Dia Art Foundation’s Web site, no permits or special permissions are required to take photographs of the Jetty.

As for artist Robert Smithson, he did not live to see the Spiral Jetty gain momentum in the press, or attention from fans. He died on July 20, 1973, at age 35 in a plane crash in Texas. Following his death, The New York Times wrote, “When a culturally significant person dies, there may occur for the living a moment of illumination, not only of one career but of a whole nexus of events and meanings into which that career was woven.” Smithson and his Spiral Jetty have gained a number of fans posthumously, including a number of fellow modern artists. 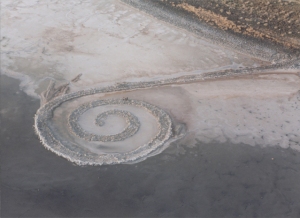 The Spiral Jetty has been called one of Utah’s best kept secrets by some. Smithson revealed in an interview with Paul Cummings that he felt the Jetty possessed a “prehistoric motif,” making it a timeless work of art in the spirit of Earth’s histories. The visitor’s center at Golden Spike National Historic Site serves as an unofficial information center for the Spiral Jetty where fans and curious onlookers can go for directions and information. Writer Kirk Johnson from The New York Times discusses the controversy that exists between the state of Utah and the Dia Art Foundation over the land surrounding the Spiral Jetty. The Utah state government, which includes the aforementioned Governor’s Public Lands Policy Coordination Office, is interested in drilling oil near the site, while the Dia Art Foundation feels that oil rigs would harm the work’s aesthetic experience. As of today, the future of the Jetty is uncertain. The debate over drilling near the site is still ongoing, and the Jetty is not visible indefinitely. However, this unique piece of artwork has carved itself an important place in Utah’s artistic and geographic history.

Madeline Vandever is a mass communication major at The University of Utah. She plans to graduate in May 2011 and will then pursue a Master’s degree in elementary education.