David Cannon Evans may not be the first, second, or even third household name one thinks of when considering celebrated communication innovations. As it turns out, Evans was a key player in helping pioneer what came to be known as the Internet. His work is deeply rooted in Salt Lake City’s very own backyard: the University of Utah.

Evans was born February 24, 1924, in Salt Lake City to David W. and Beatrice C. Evans. (Jensen, 1996) His father was the leader of an advertising firm and his family was described to have had generations of involvement in the newspaper business. (Jensen, Evans, Box 104, Folder 35) Evans married Beverley “Joy” Frewin in 1947 and together they had seven children: Anne, Peter, Gayle, Katherine, David F., Douglas, and Susan. (Jensen, Markoff) Shortly after his marriage, Evans graduated from the University of Utah in 1949 with a Bachelor of Science degree in physics. (Jensen, 1996) He later received his doctorate in the same field from the university in 1953. (Jensen, 1996) That year, Evans was hired as a senior physicist and engineering director for Bendix Corporation, where he would spend the next several years. (Evans, Box 1, Folder 2) In just a few years, Evans would engage in government work and academic research that would mark him as a significant contributor to Utah communication history.

As a military defense response to the 1957 Sputnik satellite launched by the Soviet Union, President Dwight D. Eisenhower appointed a task force of the U.S. Department of Defense named Advanced Research Projects Agency (ARPA), sometimes referred to as DARPA by adding “Defense” at the beginning. (Harvey, 2009) DARPA conducted scientific research in the field of computing and one of its branches, the Information Processing Techniques Office (IPTO), had been specifically responsible for federally funding these projects. (Harvey, 2009) By 1966, a federally funded ARPA network, nicknamed ARPANET, had been conceived to focus on the skill sets of four U.S. Universities. (Harvey, Hauben) Salt Lake Tribune journalist Tom Harvey wrote an extensive article in December 2009 reporting on the history of the Internet. He described ARPANET, the precursor to the Internet, as being “a network that would turn computers into communication devices, not just data crunchers.”

Harvey described this network in retrospect but the IPTO ostensibly noticed interesting productions also taking place from within ARPANET. Of particular interest would be the development of electronic communication spaces computer scientists had created — these could be described as the equivalent to early versions of email and chat rooms. However, this early form of electronic communication had been restricted to use on just one computer. (Evans, Box 5) This is why the concept of “time-sharing” was especially relevant. Time-sharing was the idea that electronic communication, such as email, could be extended for use on more than just one computer at a time and was a point of interest for Evans’ early research. (Harvey, Evans, Box 5) 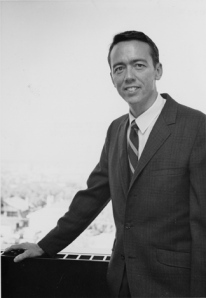 Evans joined the University of Utah as a faculty member in 1962, but he had taught previously at the University of California at Berkeley. (Markoff, Evans, Box 1, Folder 2) At Berkeley, Evans had engaged in early ARPA work but he needed support to effectively pursue his specific research interests. (Harvey, 2009) He was fortunate to have gained this support from Ivan Sutherland, a Harvard scholar and director of IPTO in 1964, who helped Evans gain federal funds to sustain ARPANET research. (Harvey, 2009) This was a notable feat, as it would establish a relationship and mark both men professionally as they eventually partnered to found Evans & Sutherland Computer Corporation, a private computer research business in Salt Lake City. (Harvey, 2009) Evans would go on to juggle his professional commitments as a faculty researcher and business leader throughout his career.

Evans returned to Utah to found and chair the university’s first Computer Science Department housed within the College of Electrical Engineering in 1966. (Harvey, Evans, Box 1, Folder 2) In December 1969, the department had connected to ARPANET as the fourth and final “node” of the original research network before it later expanded to other parts of the country. (Harvey, ARPANET) It was the only “node” uniquely situated outside of the state of California. The other three claimed their spots at University of California at Los Angeles, University of California at Santa Barbara, and Stanford Research Institute. (Harvey, ARPANET)

Each of the institutions housing the four “nodes” had a particular focus or distinguished branch of the ARPA research. The California schools were selected to study the following respectively: network measurement center (UCLA), network information center (SRI), and Culler-Fried interactive mathematics (UCSB). (Hauben, 2006) The University of Utah’s initial responsibility was to study computer graphics through the network, specifically a technique known as “hidden line removal” — a fitting match to Evans’ expertise and assumable passion for visuals and virtual memory. (Hauben, Markoff)

It appears that Evans was a highly organized scholar and that he established clear research goals for his work. He also had a talent for communicating his ideas with different groups of people. These specific and technical goals can be summarized and condensed into one phrase that Evans included in several of his abstracts, speeches, lectures, and manuscripts — he simply aimed for “improving communication” between machines and people. (Evans, Box 5, Folder 17) Evans presumably strived to allocate more creative control to humans when communicating with machines. He worked on displaying pictures on a computer screen, hence, potentially communicating unique messages depending on the creator and layout. In a 1966 speech to audience members of an educational symposium, Evans referred to John Von Neumann, a 1940s-era computer scholar, and pointed out that efforts for “extending the human intellect” were unsuccessful and should not necessarily be finite but rather a “working partnership” between computers and people could, and potentially should, be improved. (Evans, Box 5, Folder 17)

In addition to large audiences of professionals and academics, it can be said Evans also attracted a loyal group of students benefiting from his mentorship. The same year Utah joined the ARPA network in 1969, John E. Warnock, an engineering student, wrote a technical report on computer image research that was being conducted. In a section near the beginning of the report, before becoming heavily saturated with technical details, the young student dedicated a few sentences to warmly express gratitude for his mentors and supporters, including Dr. Evans. “The many hours [they] have spent with me in discussion have provided the intellectual stimulus required to carry on this research,” Warnock proclaimed. (Evans, Box 89, Folder 7)

Notably, a few of Evans’ graduate students went on to establish successful careers in computer science. They include: John E. Warnock, cofounder of Adobe Systems Corporations Inc. and incidentally the name for one of the two engineering buildings residing on the University of Utah campus; Edwin Catmull, cofounder of Pixar Animation Studios; Alan Ashton, cofounder of the WordPerfect Corporation; and Alan Kay, once a scientist at the Walt Disney Corporation. (Markoff, 1998)

Evans evidently impacted his students and colleagues in the world of academia but it is possible he influenced other industries outside of his field and area of expertise as well. He had captured the attention of business and communication industries outside of computer science and they wanted to speak with Evans about his work. On February 12, 1971, Evans composed a letter of advice to the operations research manager of the Minneapolis Star-Tribune in which he related certain aspects of his research in computer graphics as being useful for the automated production of a newspaper such as theirs. He explained how special computer-graphics equipment might make for a more efficient production process as well as give a person more creative control in the layout of the paper, including visuals such as advertisements. (Evans, Box 104, Folder 35) This letter, found in an unremarkable grey box within the Special Collections department of the University of Utah’s J. Willard Marriott library, could serve as evidence of Evans’ impact on communication history outside of his field. This begs the question as to whether any other industries experienced ripple effects of his ideas and knowledge, and, if so, what were they?

Is it possible that ARPANET researchers could have imagined that their rapidly growing work would stretch beyond their labs to help shape a fluid platform for today’s vast Internet uses? What started out as a secured U.S. Defense project continues to morph into a public resource and medium of discourse for living in the 21st century. Although not everyone is on the Internet and its uses vary, Evans’ early notions of creative manipulation of machines reveals itself in blogs, websites, research, news, and other online communication taking place at every moment of every day.

On October 3, 1998, Evans lost his life at the age of 74 to Alzheimer’s disease — a disease known for potentially consuming a person’s memory, whereas Evans spent his entire professional career studying that of computers. (Markoff, 1998) He was survived by his wife, Joy, and seven children at the time of his death. (Markoff, 1998)

Certainly, Evans could be remembered as a man ahead of his time. It is fair to say he was a visionary, an idealist with heightened intelligence and the acquired skills of an experienced communicator. Essentially, he was an important Utah figure in Internet history who had experimented with language and communication in the form of pictures and computers — a legacy that remains relevant today.

Abby M. Reyes is a senior at the University of Utah. She will complete her Bachelor of Science Honors degree in May 2015 having majored in communication studies and minored in health.

Hauben, Michael and R. Hauben. “Behind the Net: The Untold History of the ARPANET and Computer Science,” Chapter 7, Netizens: On the History and Impact of Usenet and the Internet (2006).