After the Japanese attacked Pearl Harbor on December 7, 1941, over 127,000 Japanese Americans were placed into government internment camps, due to a military exclusion order issued by President Franklin D. Roosevelt. Arrington wrote that the Executive Order 9066 was seen as a “military necessity” to remove all of the Japanese Americans, primarily from the coastal areas (California, Oregon, Washington and Alaska), to eliminate any danger during enemy attacks or raids along the coast. Arrington noted that Lieutenant General John L. DeWitt’s reasoning was that the bond between the Japanese (through culture, religion custom, race, etc.) were unparalleled; “A Jap is a Jap … it makes no difference whether he’s an American citizen or not; he is still Japanese.” (Arrington, 14) As a result, claims of communication between the coastal Japanese Americans and Japan grew largely in suspicion, though none of the claims were ever proven by reliable sources or evidence. (Arrington, 13)

A total of 10 concentration camps were constructed after the relocation mandate was issued. The Central Utah Relocation Center was housed in Delta, Utah, also known as the “Jewel of the Desert.” The camp was located where Lake Bonneville once was in Millard County. The area was known as Sevier Desert on dated maps or as “Pahvant (abundance of water)” by the Paiute Indians; the camp’s name, Topaz, derived from the Topaz Mountains located near the center. (Arrington, 21) Arrington described Topaz as windy, which stirred up “a seldom interrupted whirl of dust. Another [detraction was] the non-absorbent soil, which, after a rain [storm], is a gummy muck, ideal as breeding ground for mosquitoes.” (Arrington, 22)

The Topaz Internment camp was constructed to comprise over 19,800 acres and “consisted of forty-two checker board blocks, of which thirty-four were living quarters or residential blocks.” (Arrington, 23) The blocks were built to accommodate 250 to 300 people and “had twelve single-story resident barracks buildings, a central mess or dining hall, recreation hall, a combination washroom-toilet/laundry building, outdoor clotheslines, and an office for the block manager,” wrote Arrington. (23) Among the many Japanese Americas transferred to Central Utah Relocation Center, and the nine other camps across the nation, many if not most of the internees were teenagers and children. 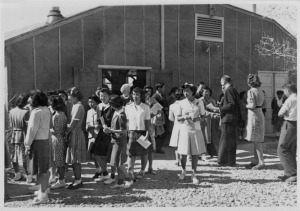 For many young people, the experience in the internment camps differed in perspective and experience than that of their parents or older Japanese Americans at the time. While camp life cast a cloud of uncertainty and worry for the future of older, parental figures, Japanese teens and children saw it differently. In fact, more often than not, many of them found ways to make the best of their situation. Many were able to meet and make new friends, attend school activities and be involved in sports. “Within the confines of the assembly centers, the Japanese Americans tried to create a community. They organized schools, camp newspapers, sports programs, and talent shows.” (Tunnell, Chilcoat, 11) Other than the fact that the teens were confined to the internment camps, their lives are very similar to the lives of many teenagers today. 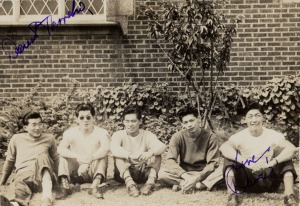 In the letters written between teenage lovers David Hisato and Tamaki Yamate, the two hardly spoke of any extreme sufferings or turmoil from being in Topaz or, in Hisato’s case, working at the Roy Labor Camp near Ogden.

Hisato sometimes spoke of the lack of work in his letters, where he only worked six to nine hours a day and earnings were tough and the harsh weather often made his hands dry. At the other extreme, he wrote about working continuously for over 13 hours a day. (Letter, September 9, 1944)

But a majority of the letters Hisato wrote to Yamate described the events of his day and his unconditional affection for her. “As for girls, no worry sweet because I got my heart on and it’s you only darling. You know I have your picture right above my bed so before I go to sleep I can look at it. Some of the boys see your picture and think I’m pretty lucky.” (Letter, September 12, 1944)

Yamate wrote similar letters to Hisato. She described the upcoming parties and dances at the high school in Topaz.

Yamate also continually expressed her love for Hisato. In one letter she writes, “The days I spend with you, are the happiest days I have spent in my whole life. I know I’ll never know that happiness with anyone else.” (Letter, March 26, 1945)

Hisato and Yamate also wrote to their friends throughout the nation and received many letters in return. A close mutual friend, “Minzo” Askiyoski, wrote them both and his letters were similar to the letters exchanged between Hisato and Yamate. There was minimal discussion of specifics of camp life, but he emphasized social and personal events.

In one letter he asks Hisato to send him some good basketball shoes if he saw any. They also exchanged holiday cards and gifts through the mail. (Hisato & Yamate Collection)

However, students in an English class at Tule Lake Internment Center felt that camp life was harmful to young minds. “Since I’ve been to camp, I no longer feel that I am a part of the world,” Yukio Kumata wrote. “I feel like a dangerous enemy spy being held in prison. I take no interest in world events concerning America as I did at home. For a loyal American to be placed in a stuffy camp, I feel I am no part of America. I am inclined to feel bitter and sarcastic about the whole fair. But as I recall my faithful Caucasian friends at home, I realize that America is and will be for the rest of my life, home for me.” (Kumata Papers)

Many teenagers found camp life dull and repetitive, but seldom complained about living conditions. Another English student from Tule Lake Internment, Heidi Morioka, described camp as being unbearably hot some days and with the lack of trees on site, there was no place to cool off under. (Morioka Papers) Nearly all the teens were happy that the camp gave them the opportunity to meet other Japanese teens/children their age. 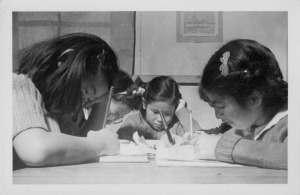 The relocation of Japanese Americans will always be significant in U.S. history. The gender, race, ethnicity, religion and color of a person’s skin do not determine their amount of loyalty or disloyalty to their country. After the recent September 11th incident, many Muslim Americans were threatened and scrutinized for an attack made by a terrorist in a Muslim country. Some Americans feared the Muslim Americans, weighing in the same accusations the Japanese Americans were accused of (sharing information and helping Japan) because “that’s who they originally are.” It’s important that these stereotypes are broken and that we as a nation do not segregate individuals based on the way they look or where they come from.

Tiffany Lieu, born and raised in Utah, began her college career at the University of Utah in August 2006. She is experienced in both print and broadcast journalism and has worked for the Daily Utah Chronicle, KTVX ABC 4 News, News 8 Texas, Lessons Magazine and KUTV CBS 2 News. Lieu loves being able to share her love of writing and communicating by helping others tell their stories. Lieu studied mass communication, with a focus in journalism and graduated with a bachelors of science in May 2010.