In May 1869, the final spike was driven into the ties at Promontory Point, Utah, to complete the nation’s first transcontinental railroad. (Richards, 137) By 1906, railroad tracks crisscrossed the state. Trains were coming and going through many of Utah’s towns, hauling freight, mail, and passengers. As the capital, Salt Lake City had heavy train traffic, but the small, dilapidated depots were inadequate to handle the demand.

The grand exterior of the Denver and Rio Grande Depot. 3rd South became one of the busiest streets in the city because of the trolley traffic and the numerous businesses and restaurants that lined the paved lane. Digital Image © 2008 Utah State Historical Society. All Rights Reserved.

The Denver and Rio Grande railroad (D&RG) proposed to build a modern depot in downtown Salt Lake. On the 100th birthday (August 20, 2010) of the completion of the D&RG depot, Brandon Johnson, from the National Endowment for the Humanities in Washington, D.C., explained in his keynote address that the depot had initially been opposed by local neighborhoods. Because there would soon be a new Union Pacific Depot several blocks away, they feared the increased congestion and noise. In the end, however, the City Council sided with vocal business leaders and the area was greatly benefited economically by the addition of the D&RG depot. (Arave, 2010) The magnificent Rio Grande Depot, as it is now known, stands as a tribute to a past age in which trains were the arteries of industry and travel across America. 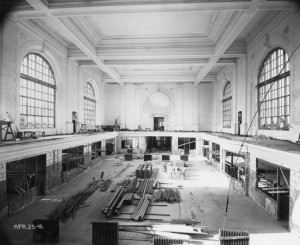 The interior of the depot while it was still under construction. Digital Image © 2008 Utah State Historical Society. All Rights Reserved.

The December 15, 1906, Deseret Evening News headlined with the long awaited announcement that George J. Gould, the “Young Colossus of the Railway World” and executive of D&RG, had plans to build a brand new train depot in the heart of Salt Lake City. The article exclaimed that Salt Lake was to be the “great mountain division point in George Gould’s ‘Atlantic to Pacific’ system.” While some residents had been skeptical of the necessity of a second depot, businessmen understood the implications of having two train depots to compete for business. The article articulated the benefits of two depots by explaining that, “It is all indicative of how the kings of finance and industry view the future of Salt Lake.” Clearly if men of great financial means were willing to pour money into large business projects, they had faith in the economic future of the city.

On page two of the same newspaper, another article detailed some early plans for the size and style of the building. The author described plans for the new passenger depot as “modern” and “up to date” and since Gould “builds for the future,” it would be one of the finest structures west of the Missouri River. This same article in the Deseret Evening News on December 15, 1906, announced the chosen site for the new depot as 3rd South, between 4th and 5th West. An update on the construction of the new depot was given in a January 3, 1909, article in The Salt Lake Tribune that encouraged Salt Lake residents not to worry about financial issues slowing its completion. The author explained that the D&RG executive E. H. Harriman was “watching Salt Lake grow, and while he is watching he is working for that end with all the might of his great financial standing.” Again, the people of Salt Lake had high hopes that their city and state had been targeted by financial titans as a place worth investing in.

A common theme among the articles regarding the depot was that Salt Lake was soon to be a burgeoning city.  “Salt Lake City will become the commercial metropolis of the west,” claimed an article on page 23 of the August 20, 1910, edition of the Deseret Evening News.

Utah industries eagerly awaited the increased routes in and out of the city. An article published in the Salt Lake Herald-Republican on August 14, 1910, described the new depot as a “Golden hopper to feed the city through extensive channels of trade and varied industries which stretch octopus-like east and west.” The D&RG depot would connect Salt Lake with new trade markets along the 20,000 miles of rail lines stretching from San Francisco in the West to Pittsburgh in the East, according to an article on page 22 of the August 20, 1910, Deseret Evening News.

That article included many ads for the newly built-up business district surrounding the depot. Acorn Printing Co., the Salt Lake Stamp Co., and the Bicycle Supply Co. were among a few that listed the great deals they would have in honor of the opening of the new depot, which was officially August 20, 1910.  The May 15, 1910, edition of The Salt Lake Herald-Republican described how 3rd South was turning into one of the busiest streets in the city. In fact, a brand new hotel, the “Mardorf Hotel,” would soon be under construction to accommodate the swell of visitors the D&RG depot was expected to bring.

With only days left until the first trains would pull into the depot, an August 14, 1910, article in The Salt Lake Tribune listed some facts about the new building. As promised back in 1906, Gould never did anything halfway and the estimated cost of the construction was over $750,000 (more than $18 million in today’s dollars). Other businesses had also been building up their infrastructure to take advantage of expanded opportunities. The Utah Light & Railway Co. had built a new streetcar line to the depot to facilitate travelers coming and going, announced The Salt Lake Herald-Republican in July 1910.

On the morning of August 20, 1910, the first passenger train rolled into the Denver and Rio Grande Depot in Salt Lake City. The structure was a magnificent edifice built by the famed Chicago architect Henry J. Schlacks, according to the August 14, 1910, edition of The Salt Lake Tribune. The article also detailed the beauty of the exterior of the building as consisting of white Colorado Yule Marble at the base that was contrasted wonderfully by red New Jersey rain-washed brick that made up the walls. Goodwin’s Weekly described the interior of the building as corresponding “in beauty to the exterior,” in its article published on the long awaited opening day. The spacious building’s main hall was illuminated by “three immense arched windows on each side through green opalescent glass,” which gracefully complemented the brownish-red and gray color scheme. The Tribune’s August 14 article also gave a long list of the depot’s amenities, including: baggage/parcel rooms, a men’s smoking room, a women’s retiring room, a restaurant, and telegraph and telephone offices. Covered platforms lined the tracks behind to the depot to protect travelers from the elements of snow, rain, and sun. It was the most modern and completely equipped union passenger depot of its size in the country. Travelers to the city would now be greeted with a grand sight that lent credence to the city’s ever burgeoning economy.

Passengers line up to board the first train on the opening day of the Denver and Rio Grande Depot. Digital Image © 2008 Utah State Historical Society. All Rights Reserved.

George J. Gould’s foresight to build a magnificent and costly depot in the heart of downtown Salt Lake City helped to mold the economic destiny of a state and its people. The architecturally elegant Denver and Rio Grande Depot brought not only pride to city residents, but also brought prosperity to Utah in numerous ways. New shops, restaurants, and hotels benefitted from the increased number of travelers to the city. The expanded rail lines opened new trade markets for Utah’s entrepreneurs.

To this day, over 100 years since the official opening of the depot, residents of Utah look upon the Rio Grande Depot as a monument to the perseverance and ingenuity of a generation past. While the Depot no longer acts as a hub to an artery of trade, industry, and travel, it stands as a tribute to the capitalist nature of America that took Salt Lake from a desert valley in 1847 to a thriving, prosperous city that played host to the world for the 2002 Olympic Winter Games. And though long past its prime in terms of age, the Denver and Rio Grande Depot has not been retired into the abyss of vacancy; it now houses the Utah State Historical Society, which helps to preserve our past so that we can have a more prosperous future.

Kelsie Haymond graduated in May 2012 in Mass Communication from the University of Utah.

“Epoch in Utah’s History Is the Opening of Western Pacific and New Gould Terminal in Salt Lake,” The Salt Lake Tribune, August 14, 1910, 3.