In 1833, Joseph R. Walker, an explorer, was interested in the region of the Great Salt Lake. During his journey, he traveled through the northern perimeters of the Salt Flats in Utah, while working for Captain Benjamin L.E. Bonneville. (Hallaran, 2011) Little did Walker know, he was traveling across more than 45 square miles of Salt Flats, which is roughly 30,000 acres. Since that exploration, the name of the area has come to be known as the “Bonneville Salt Flats.” Many years later, other explorers wanted to use the Bonneville Salt Flats as a shortcut to the Pacific Coast. However, this was deemed to be an inefficient way of traveling due to the mountainous terrain, which cuts across the flats. (Hallaran, 2011)

In 1910, Ab Jenkins discovered the Bonneville Salt Flats for his own. The Salt Lake Tribune reported on August 21, 2011, that Jenkins found the Salt Flats when he was riding his motorcycle to Reno to see Jack Johnson fight Jim Jeffries in the “Fight of the Century.” According to Hallaran, Jenkins returned to the flats in 1925 where he decided to race his Studebaker truck across the Salt Flats, walloping a special excursion train by more than ten minutes in the race. Jenkins decided to race this train because of the long, flat and desolate surface the Salt Flats provided. It was here in 1925 when Jenkins realized that this remote area had true potential for being a place to achieve land speed records. After Jenkins’ race, he said, “That was my first time on the salt with an automobile, and right then and there I realized the tremendous possibilities of those beds for speeding.” (Embry and Shook, 1997) It was from this day on that the Bonneville Salt Flats have been classified as a world renowned raceway, known for its high speeds and potential for setting land speed records.

Ab Jenkins sitting inside his racing vehicle, the "Mormon Meteor," on the Bonneville Salt Flats Raceway, late 1930s. Photo courtesy of the Special Collections Archive at the J. Willard Marriott Library, The University of Utah.

Jenkins was born in Spanish Fork, Utah, and was raised in Salt Lake City. He was a man of many different trades. Not only was he known for his development of racing on the Salt Flats and making this a place to set land speed records, but according to The Salt Lake Tribune “The Meteor Rides Again,” he was also known as a race-car driver, safety advocate, and the mayor of Salt Lake City for a time during World War II. In 1932, Jenkins took his 12-cylinder “Pierce-Arrow” automobile to the Bonneville Salt Flats, where he began the sport of land speed racing.

Between the years of 1932 and 1956, Jenkins achieved many new, world land speed records at the Bonneville Salt Flats. According to an article published in The Deseret News on October 15, 1946, Jenkins was considered to be “the holder of more automobile racing records than any other racing driver in the world.”

Setting these world records caught the attention of many exceptional racers worldwide, bringing them to Utah to get a taste of the Bonneville Salt Flats. Jenkins’ popularity grew ever so rapidly once he had exposed these land speed records to the mainstream public. Furthermore, in 1950, Jenkins wiped out twenty-six world records on the Bonneville Salt Flats in his “Mormon Meteor.” He named his racecar the Mormon Meteor to show respect to his Mormon faith and heritage.

Ab Jenkins racing his "Mormon Meteor" across the Bonneville Salt Flats, circa 1936-1939. Photo courtesy of the Special Collections Archive at the J. Willard Marriott Library, University of Utah.

In an article published by The Deseret News in 1950, the paper refers to the Bonneville raceway as “glassy-smooth” and “record fast” as well as very dry, which was great for setting land speed marks. As reported in an article published in The Deseret News on July 15, 1951, the 68-year old set out to race his Mormon Meteor at speeds of more than 200 mph. This is especially astounding given his age and how he had already “racked up more than 10,000 records and has never had an accident on the flats, a course that ranks as the world’s fastest and safest.”

Although Jenkins had thousands of records under his belt, he did have problems with his racecar early on. In an article published by The Deseret News in 1936, the author explains how Jenkins lost two of his records due to a mechanical error when a casting leak led a universal joint to burn out, paralyzing his car and wiping him out of that day’s record-setting runs. Even though circumstances such as mechanical malfunctions can occur, it was — and still is — very important that these racecar drivers had a crew of mechanics with them as well as parts so they could fix any problems at hand. Above all, Ab Jenkins was the catalyst to the sport of land speed racing at the Bonneville Salt Flats and he had turned this sport into a popular worldwide event that takes place annually September 8-12, right here in Utah. 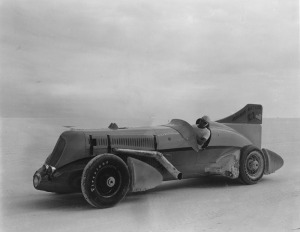 Ab Jenkins sitting inside his "Mormon Meteor" on the Bonneville Salt Flats, late 1930s. Photo courtesy of the Special Collections Archive at the J. Willard Marriott Library, University of Utah.

To get an idea of the types of automobiles Ab Jenkins and other racers were using (and still are used to this day), it is important that we know these racers used everything from 12-cylinder gas engines to straight jet engines. For example, in 1932 (Jenkins’ first race on the Salt Flats) he pushed his 12-cylinder Pierce-Arrow to the limits by driving it on the flats for 24 hours straight, only to stop for refueling. His average speed in this race was 112.916 mph. (The Salt Lake Tribune, 2011) The A.A.A., however, did not record this land speed record. Being the goal oriented and driven man that Ab Jenkins was, he decided to go after his own record again in 1933.

Furthermore, he influenced “top British racers Sir Malcolm Campbell, Capt. E.T. Eyston and John Cobb to visit the Salt Flats for the first time, setting records and launching the site’s global reputation.” (The Salt Lake Tribune, 2011). Just a couple years later in 1935, Jenkins came out with his “Mormon Meteor II,” which was a 12-cylinder Curtis airplane engine that had a little over 400 horsepower. In this vehicle he set a 24-hour land endurance average speed record of 135 mph, covering over 3,523 miles. (Owens, Supercars.net) Jumping ahead to 1970, Gary Gabolich’s rocket car, “Blue Flame,” set a speed of 622.4 mph (The Salt Lake Tribune, 2011). When these men are out racing their cars, it is the A.A.A. that is clocking their official times on the racetrack (or Salt Flats). In a September 1936 article published by The Deseret News, the author wrote that Jenkins was to pay $2,500 to the A.A.A. timers for their assistance in clocking the official runs down the Salt Flats. Back then, $2,500 was a lot of money, but thanks to Jenkins’ accomplishments and popularity in the state of Utah, the Optimist Club (a philanthropic organization) gathered this money for Jenkins and paid the A.A.A timers for his runs.

After many years of passion and joy for the sport of land speed racing, Ab Jenkins is still a legend and still holds the 48-hour endurance record to present day. According to Barracuda Magazine, “Ab Jenkins held and broke more records than any other person in the history of sports.” Jenkins’ attitude and outlook on life and the sport of racing was rare. “Jenkins was a breed of consummate sportsman-gentleman whose polite and honorable conduct today seems as rare and quaint as the open-cockpit Pierce-Arrow that he first raced at Bonneville.” (Barracuda Magazine) Additionally, in an article published by The Salt Lake Tribune in July 1935, John Cobb (a top British racer) applauded the sportsmanship of America and spoke very highly of Ab Jenkins, whom he called the “Iron man of America.”

Janna Bushman and James Davis, “Crafting a Sense of Place: Media’s Use of the Bonneville Salt Flats,” Journal of Cultural Geography 17, no. 1 (1997).