The journey to the Salt Lake Valley was extensive for Mormon pioneers. Mormons were looked down upon in the East so Joseph Smith, the first Prophet of the Church of Jesus Christ of Latter-day Saints, made plans and encouraged the members of the Church to travel to the West.

Joseph Smith, Hyrum Smith, John Taylor, and Willard Richards were Church leaders who were in conflict with many and were prosecuted in Nauvoo, Illinois. Soon after being jailed, a mob came to Carthage Jail and killed Joseph and Hyrum. Taylor was severely injured and Richards managed to escape unharmed. Brigham Young, who became president of the Church after Joseph Smith was murdered, went into action and arranged a large group of Mormons to head West in 1846. (Layton)

Willard Richards, who was Brigham Young’s cousin, became a convert to the Church in 1836. Richards held many roles throughout his life. At points in time he served as secretary of the government of the State of Deseret, presided over the council of the Legislative assembly, worked as postmaster of the Great Salt Lake City, was involved with the Emigrating Fund Company, served as recorder and general historian of the Church, and was the founder of the Deseret News. (Richards) He also was an influential herbal medicine doctor and held high authority positions in the Church. 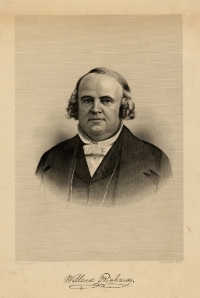 Soon after he converted to the Church, he traveled far to meet Joseph Smith. Once acquainted with Smith, Smith appointed Richards to be his private secretary. He became the Church historian and recorder in Nauvoo in 1841. (Searle) He worked very closely with Smith and kept all of his personal journals, even up to his death in Carthage Jail. “During his final hours in Carthage Jail, Joseph Smith apparently instructed Willard Richards to continue the history according to the plan and format that they had previously followed.” (Searle) Searle also noted that the history was written under the supervision of Brigham Young and that it seemed well to give Willard Richards nearly all the credit for the compilation and publication of the history of Joseph Smith. (Searle)

In a letter written by Richards to his sister, he expressed his feelings toward the religion saying, “I must tell you sister what it is to be a ‘Later [sic] Day Saint’ a ‘Mormon’ vulgarly. It is to believe & practice every known or revealed truth, in relation to every being & thing.” (Richards) He was a very dedicated member in his church, and continued to dedicate himself to several other commitments throughout his life, including being editor of the Deseret News, a Church-owned publication.

Just three years after several Mormons had settled in the Salt Lake Valley, Richards founded the Deseret News. The first issue was written by Richards on June 15, 1850. The Deseret News’ first issue included the prospectus and stated:

“We propose to publish a small weekly sheet, as large as our local circumstances will permit, to be called ‘Deseret News,’ designed originally to record the passing events of our State, and in conexion [sic], refer to the arts and sciences, embracing general education, medicine, law, divinity, domestic and political economy, and everything that may fall under our observation, which may tend to promote the best interest, welfare, pleasure and amusement of our fellow citizens.” (Richards, 1850)

In that first issue, he also discussed the importance of keeping copies and a record of the publication, and encouraged people to take care of their copies so that “their children’s children may read the doings of their fathers, which otherwise might have been forgotten; ages to come.” (Richards) In a dissertation written by Monte B. McLaws, it discusses that since editors of the Deseret News were mostly in the Church hierarchy, the paper did not need close supervision because Brigham Young felt comfortable trusting many of the decisions made by Richards, and other editors close to the Church. (McLaws) The Deseret News was powerful among Mormons in Utah, and practically replaced all other reading materials. (McLaws)

Searle states that, “As a boy, Richards eagerly sought education and demonstrated both an affinity and an aptitude for learning.” (Searle) Searle notes that he became influenced by Dr. Samuel Thomson’s Practice of Medicine to become an herbal doctor. A few Mormons were impressed by Dr. Thomson. He discovered a plant, lobelia, which became the foundation of his medical system. (Divett) Thomson said, “I had the curiosity to pick some of the pods and chew them; the taste and operation produced was so remarkable that I never forgot it. I afterwards used to induce other boys to chew it, merely by way of sport, to see them vomit.” (Divett) He described it as an “Emitic [sic] Herb.” (Divett) Richards was inspired by this and became a dentist and doctor of herbs. (Markers: Willard Richards) He also organized a group called the “Society of Health” but for a period of time, members of the Mormon Church were hesitant to be supportive of medical practitioners. (Divett)

Conclusion: In a journal entry written about a sketch of Willard Richards, it states, “It would be difficult to name any one of the original band of Utah pioneers who filled a more active life than the subject of this sketch. The duties he performed and the offices he held from the time he embraced Mormonism until the date of his death, were so numerous that it is a matter of wonderment how one man could have sustained them all.” Willard Richards fulfilled many roles in his life as a religious leader, and within his community. In an oration given by Richards, he said, “Men cannot fight truth, life or salvation without a medium of communication.” (Richards) He influenced news writing, medicine, and the Mormon religion.

Emily Sylvester is a senior at The University of Utah. She is majoring in mass communication.

“About Us,” Deseret News.

“Markers and Monuments Database: This is the Place Monument,” Utah State History, State of Utah.

D. Michael Quinn, “They Served: The Richards Legacy in the Church,” Ensign (January 1980).