On a cool night in Salt Lake City, Utah, Bill Howard, broadcaster for the Utah Stars, called what would be the last game of the 1970-71 ABA season. The Stars met up with the Kentucky Colonels in a win or go home matchup to determine the champion of the American Basketball Association. With 21 seconds remaining, Mike Butler made a driving layup to put the Stars ahead 129 to 118. The dull roar in downtown Salt Lake City turned into a frenzied cry of excitement as 13,000 fans arose from their seats in the Salt Palace arena. The noise grew louder with every passing second ticking off the clock. Kentucky’s Cincy Powell hit a 3-point shot with two seconds remaining to make the score 131-121 in favor of the Stars. It wasn’t much consolation as Stars center Zelmo Beaty raised his arms in triumph and excitement of the inbound play to come. Beaty received the ball and bedlam ensued as a mob of ecstatic Stars fans rushed the court to show appreciation for the team they had quickly come to love. In their first year in Salt Lake City, the Utah Stars had won the ABA championship. (“We’re No. 1”)

In the days following the historic ABA finals victory, the Stars received local media attention that rivaled most NBA franchises. When team owner Bill Daniels relocated the Stars from Los Angeles to Salt Lake City in June 1970, he claimed that the Utah Stars would become “the Green Bay Packers of professional basketball.” (Roblez) Some owners and media members were skeptical and believed the team would never be able to gain the fan support and media exposure needed in order to survive in the ever-shaky ABA. But Utah sports fans proved the critics wrong and became one of the most passionate and supportive fan bases in the entire league.

At a time when the ABA was fighting for fan support and television viewership with the more established NBA, Utah Stars fans exceeded expectations by continually filling the gem of Salt Lake City, the Salt Palace. An article in the May 28 edition of the Davis County Clipper recalled the ABA attendance record set during the Stars’ inaugural season in Salt Lake City. In the 42 regular season home games in the 1970-71 season, the Salt Palace welcomed in 262,342 fans, averaging just over 6,000 fans per game. In its first year, the franchise had broken the ABA attendance record set by the Carolina Cougars the previous season with 254,163 fans. Attendance grew as the regular season ended and the playoffs began. In the final seven playoff games played at the Salt Palace (three against the Indiana Pacers and four against the Kentucky Colonels), the Stars averaged 12,923 fans per game, 700 more people than the Salt Palace could seat. 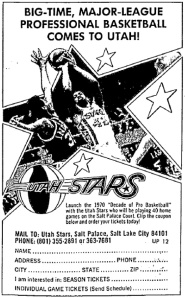 Advertisement published in The Salt Lake Tribune. Image courtesy of the newspaper.

When the Stars were not playing at home, media outlets like the Salt Lake Tribune kept diehard fans (especially those in more rural areas of Utah) in the know during the 1971 playoff run. When the Stars defeated the Indiana Pacers in game seven of the Western Division Finals in Indianapolis, they returned home to the warmest welcome any team from Utah had ever seen. Salt Lake Tribune reporter Steve Rudman recalled the scene at the Salt Lake International Airport on April 29, 1971, as 3,000 raucous Stars fans welcomed home the newly crowned ABA Western Division Champions: “The arrival at the airport, with its attendant pomp and ceremony, was the culmination of a very hectic 24 hours, a time in which the Stars defeated Indiana, 108-101, partied half the night in celebration and then made the long trip back from Indianapolis after a couple of boring hours in Chicago. But it was all worth it for the Stars.” The celebration continued as more fans lined the streets of Salt Lake City to await the motorcade bringing the Stars back home to the Salt Palace.

A few days later, the Stars began their ABA championship series against the Kentucky Colonels of the Eastern division. On May 9, Rudman and the Salt Lake Tribune had to break the news to the Stars faithful that the team had dropped its second straight game to the Kentucky Colonels in Louisville after winning the first two games of the best-of-seven series in Salt Lake City. “The home court advantage may be some consolation,” he wrote, “but the Utah Stars really did want a split here. Instead they dropped both games and now it would appear Kentucky has the momentum going.”

Ten days after Stars fans were thrown into a pool of uncertainty after the game four loss to the Colonels, the Stars returned home for the final game of the best-of-seven series and defeated the Colonels 131-121 en route to the ABA Championship. While Stars fans jumped, yelled, hooted and hollered, local reporters were busy at work writing stories that had never been covered before in the state of Utah, the story of a professional sports championship.

In his article on May 21, 1971, Dan Pattison of the Deseret News proclaimed the win as the “Miracle on West Temple Street.” Pattison also gave Stars fans an inside look at the glory and pride felt by Stars players. Stars forward “Wondrous” Willie Wise said he wanted to wear his Utah Stars uniform “forever,” and center Zelmo “Big Z” Beaty proclaimed his appreciation to his teammates and the fans all over Utah. “I feel like I’m on top of the world,” he told Pattison. “It took eight years of playing for me to do something like this. I’ve played with some great guys before, but not like these guys. We just couldn’t let the fans down. It was a pleasure to play in Utah this season.”

Numerous sports reporters for the Salt Lake Tribune offered their congratulations to the team and had plenty to say about the historic win for the Stars and for the state of Utah. John Mooney, the renowned sports editor, wrote a short but sincere thank you to the Stars on the front page of the May 19, 1971, Salt Lake Tribune sports section. In the short letter, Mooney applauded the graciousness and humility of Stars coach Bill Sharman as well as team owner Bill Daniels and team president Vince Boryla, who would constantly thank media writers for their attention to the team and for their help in building a loyal fan base. “Every game when you walked by and said ‘Good luck,’ someone would say, ‘Whether we win or lose, thank you for everything you’ve done to help us this far,’” Mooney wrote. In the world of sports, where members of the media can often be blamed for added pressure on athletes or the demise of front office staff, the Stars showed true class by embracing their local sports writers as their partners in the business of success. Near the end of his letter, Mooney wrote, “The Stars won magnificently, but graciously. They had words of thanks for everyone, especially the fans who adopted a wandering ball club and took it to their hearts. The whole organization was major league, all the way.”

Also on the front page of the May 19, 1971, Salt Lake Tribune sports section was a stirring fan piece by reporter Dick Rosetta. All of Utah jumped on the Stars bandwagon, in the best sense of the word. Fans came from the red-rock cliffs of St. George and Kanab, from the arches and canyon lands of Moab and Price, from the farm country of Fillmore and Vernal and from the college towns of Ogden and Logan. People talked about the opportunity the Stars had to put Salt Lake City in a national spotlight. Stars fan Ron Henriksen told Rosetta over the noise inside the arena that night, “What difference does it make what time of year it is? Can you imagine what this has done for Utah over the nation? Man, anyone who could argue against basketball must be nuts.” That night fans didn’t even care about the crammed seating, lack of seating, uncomfortable heat or deafening noise, they were just glad to be there. Stars fan Dennis Dall proclaimed to Rosetta, “Ah, the sound doesn’t matter, the Stars do their own talking. They are the greatest thing that’s ever happened to this state.” That night, the Salt Palace was a portrait of pent-up people, ready to prove that Utah, yes, even Utah, could house a champion.

Over the next three seasons the strong Stars roster continued to dominate ABA competition, finishing all three years atop the Western Division standings. The Stars also made history by signing the first professional basketball player straight out of high school, a young and extremely talented Moses Malone, who went on to become an NBA champion, hall of famer and NBA top-50 all-time player. (Moses Malone Biography) But despite their talent, the Stars were unable to re-create the playoff magic that captivated Utahns in the Spring of 1971. The 1974-75 season was a disappointing one for the Stars and their fans, finishing with a record of 38-46, good enough for fourth in the Western Division standings. Monetary troubles began to plague new team owner James A. Collier in 1974, forcing him to sell the team to the Johnson brothers, Snellen and Lyle, before the 1975 season. The duo proved to be unfit to manage the small earnings of an ABA franchise and just like that, the Utah Stars disbanded after playing just 16 games in the 1975 ABA season. (Roblez)

Despite the disappointing end to the franchise, the Utah Stars were a catalyst for what is now a thriving sports culture in the state of Utah. Without the Stars, the notion of moving the NBA’s New Orleans Jazz to Salt Lake City would never have been considered. Other professional teams have come and gone: the Arena Football League’s Utah Blaze, the American Professional Soccer League’s Salt Lake Sting and even the WNBA’s Utah Starzz (a fitting homage to the state’s basketball heritage). None came close to having the same impact that the Utah Stars had on Salt Lake City.

Stars radio broadcaster Bill Howard once said, “The Stars boosters include the young, the elderly, the professional man, the blue collar worker, the household; all of whom dig the action and the emotion of professional basketball.” (“We’re No. 1”) Not only did this wide array of fans appreciate the Stars, but also the growing population of Utah’s sports reporters. The team was not only a professional opportunity for its players, but for those who covered them as well. The Stars gave news reporters in Salt Lake City the unique opportunity to cover a nationally recognized entity that Utah had had only a few times before. Anyone who wants to cover professional sports in a small market city need only look at the relationship between the Stars and their various news writers to truly understand the impact the team left on its followers.

Today, the most influential reminder of the Stars is former player Ron Boone, who remained a Salt Lake City resident even after his playing career with the Stars and the NBA’s Utah Jazz. Boone described the Stars 1971 ABA championship as “the greatest accomplishment” of his career and claims that Salt Lake City was where he spent his “best years” as a player. (Biga) Boone remains a fixture of the Utah Jazz broadcasting team, where he has been color commentating on television and radio since 1991. He is, perhaps, the greatest icon left from a team and an era that truly, in the mind of Utahns, has earned its heavenly place among the stars.

Talon Chappell is a senior at the University of Utah. He is majoring in mass communication with an emphasis in journalism.