October 15, 1985, began just as any other crisp, fall morning in Salt Lake City, Utah. Steven Christensen, a businessman who was described in the January 23, 1987, edition of the Deseret News as “an avid collector of Mormon documents,” made his way to work in the Judge Building located downtown. At the same time, Kathy Sheets, the wife of Christensen’s former business partner, J. Gary Sheets, began her day in the quiet suburb of Holladay, located 20 minutes south of the city. When two bombs, which killed both Christensen and Kathy Sheets, suddenly exploded within mere hours of each other, the entire valley was shocked. Newspaper headlines in the days following the bombings, such as, “Bombings shatter area’s composure: ‘It’s beginning to seem like Lebanon,’” found in the October 17, 1985, issue of the Deseret News, indicated that fear was a tangible issue within the community. This is a very telling piece of historical evidence that shows the seriousness of the event and its influence. This intensity and mystery maintained itself throughout the two-year-long journey that included the investigations, trial, and eventual conviction of Mark W. Hofmann for the murders of Steven Christensen and Kathy Sheets.

The book, Salamander: The Story of the Mormon Forgery Murders by Allen D. Roberts and Linda Sillitoe, describes the early years of Hofmann and his upbringing in Utah during the 1960s and 1970s. His family was active in the Church of Jesus Christ of Latter-day Saints (LDS) and he took an interest in some unique hobbies as a child, including performing magic tricks. Even though Hofmann was raised in the Mormon religion, he concluded that he did not believe the teachings of the church and secretly rejected the religion as a whole by the time he reached his teenage years. Since his family was still very active, Hofmann kept his newfound beliefs and feelings to himself and managed to convince his peers that he was still interested and involved. He kept up the act by serving a religious mission and marrying within the church. An amused Hofmann took pleasure in tricking his family and fellow church members about his involvement, which could stem back to his early years. Roberts and Sillitoe discuss his childhood and how he “loved tricking people and practiced his illusions diligently.”

After he married, he began to discover and collect historical books and documents, mostly regarding the history of the Mormon religion and the early development of the LDS Church. During the course of his collecting, he began to come across ancient Mormon documents among the pages of some of the books. One of the most controversial and most discussed letters that Hofmann brought to light was the Salamander Letter. This letter called into question the seriousness and validity of Joseph Smith’s discoveries and translations during the beginnings of the religion. Smith founded the LDS Church after discovering ancient writings near his home in western New York.

As Hofmann became more involved with his collecting, he connected with Christensen, who also enjoyed finding these rare documents having to do with Mormon history. The set of documents that sparked the bombings and the controversies was called the McLellin Collection, written by William E. McLellin. 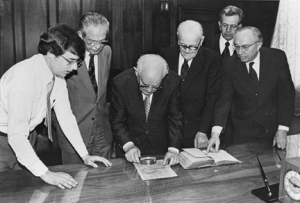 McLellin was “an early church apostle who later left the church,” according to the Deseret News on October 27, 1985. The article reported that he left the church because he had issues with some of the beliefs and practices taking place and that he “came into frequent conflict with church leaders.” The desire for this collection stemmed from the actual content within the letters. The Deseret News reported the basis of this content as giving “some of the first accounts of President Smith’s involvement in plural marriage.” On October 27, 1985, the Deseret News wrote, “The collection has proven elusive over the years, prompting some to dispute its existence. Yet it’s believed by many scholars and historians to exist.” This brought about the initial controversial nature of the documents and called into question some of the other documents Hofmann collected and sold.

While many of the documents he produced were questioned for authenticity and accuracy, Hofmann was talented enough that he had many experts defending their quality. One such example, as reported by the Deseret News on October 17, 1985, was Leonard Arrington, who was a professor of Western history at Brigham Young University. He said “documents discovered previously by The Church of Jesus Christ of Latter-day Saints and he doesn’t believe they are forgeries.” Over the course of Hofmann’s activities, he sold many of his forgeries to collectors and the LDS Church alike. It was only a matter of time before the validity of his career was threatened.

Many motives were suggested as to why Hofmann orchestrated the bombings that led to the deaths of Christensen and Sheets. One of the most recurring ideas, however, was the motive of Hofmann covering up his shady dealings. The January 23, 1987, edition of the Deseret News reported, “Police and prosecutors believe that Christensen … may have discovered the fraud and threatened to expose Hofmann.” Hofmann must have felt the pressure and the article further suggested that, “Rather than risk a lucrative career in documents dealing, Hofmann killed Christensen and then planted another bomb at the home of J. Gary Sheets.”

The whole scheme came to a breaking point when a third bomb was prepared but malfunctioned and exploded in Hofmann’s car with him inside on October 16, 1985, the very day after the initial bombings. Officers found similarities between both bombings as reported by the Deseret News on October 17, 1985: “The bomb that injured Hofmann is almost identical in connection to devices that killed Steven F. Christensen and Kathy Webb Sheets.” The article continued, “Wednesday’s bomb apparently did not contain the shrapnel that sprayed in all directions in the first two blasts.”

The case took one year and three months to be compiled and executed. While it wasn’t until April 1986 that Hofmann’s role as a suspect was confirmed, he didn’t actually go to trial until January 1987. On January 23, 1987, the Deseret News reported the outcome of the trial. The judge overseeing the trial concluded that, “Due to the indiscriminate nature of the killings and the type of devices employed … I want you to serve the rest of your natural life in the Utah State Prison.” Hofmann pleaded guilty on “two counts of second-degree murder” and because of his confession, “prosecutors dismissed more than two dozen other complaints charging the documents dealer with theft by deception, communications fraud and bomb construction.” Hofmann is currently serving his life sentence in the prison located in Draper, Utah.

Jessica Oneida is in her fourth year at the University of Utah. She is majoring in Strategic Communication with minors in Business Administration and Design.