The October 9, 1941, issue of the The Utah Chronicle reported that H. V. Kaltenborn, the “fearless correspondent, editor, and radio newscaster,” would be speaking at the University of Utah’s first “Master Minds and Artists series” at the Salt Lake Tabernacle, after demand exceeded the capacity of the on-campus Kingsbury Hall. The event was sponsored by the university extension division, which brought Kaltenborn to deliver “his analytic accounts of war reports” based on his experiences as a broadcast journalist covering the war between Germany and Great Britain and his time spent living in Germany, where he had developed a “hate for Hitler and the Nazi regime which can only come from personal observation.”

According to journalism historian Louis Liebovich, Hans Von Kaltenborn was an extremely popular and important radio broadcaster throughout the 1940s and was the “most listened to foreign affairs commentator of the time.” Kaltenborn’s radio broadcast was regularly listened to by anywhere from 10 to 17 percent of American homes during the years 1942 through 1947, meaning that his program “reached a larger portion of the American public across the country than any other single news opinion source with the exception of Time magazine.” His influence greatly shaped American discourse by stimulating newspaper editorials, effectively attacking high-ranking government officials, and shaping public opinion of government policy (Liebovich, p. 47).

Kaltenborn’s popularity was certainly evident in the tone of the coverage before and after the event by The Utah Chronicle and the Salt Lake Telegram. The October 15, 1941, issue of the Telegram called Kaltenborn the “No. 1 news commentator” and from the moment he landed at Salt Lake airport the paper reported on his observations of the war in Europe and specifically “the Russian fight against the invading Germans.” The Salt Lake Telegram’s subsequent October 16 issue reported that these topics were also addressed during Kaltenborn’s speech when he said that Hitler’s invasion of Russia was going so poorly that even Hitler admitted he had made an error.

Kaltenborn’s assessment of the war was also combined with a strong endorsement of the U.S. providing support to the Allied forces and called for a more involved foreign policy. According to the October 16 issue of the Salt Lake Telegram, during Kaltenborn’s 90-minute address to the audience of 5,000 people, he said that “[t]he weight of the United States will decide the turn of events in the European war” and that if China, with the support of the United States, could take the offensive with Japan “it might change the world situation.”

The Utah Chronicle’s coverage of Kaltenborn’s speech in its October 16, 1941, issue highlighted his dislike of Hitler, the Nazi regime, and its desire for conquest. The article also brought up Kaltenborn’s concerns in the “Far East” where Kaltenborn said, “Japan feels her destiny is to rule.” The article finished its coverage by describing Kaltenborn’s warning about labor unions and profit motives interfering with the defense industry and his conclusion that “Russia will never be conquered.” 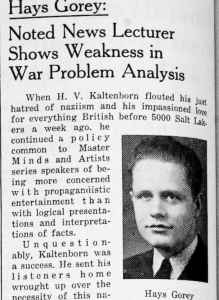 Kaltenborn’s speech and perspective was not without criticism, however, and in The Utah Chronicle’s October 23, 1941, issue, Hays Gorey argued that Kaltenborn “continued a policy common to Master Minds and Artists series speakers of being more concerned with propagandistic entertainment than with logical presentation and interpretation of facts.” While Gorey’s opinion column admitted Kaltenborn’s speech was “a success,” Gorey charged him with creating “a war-frenzy” and making claims without substantiating them with a “firm foundation of reasoning.” Of these claims, Gorey specifically questioned Kaltenborn’s analysis of the defensive capabilities of the English Channel, his certainty that Hitler was “inherently sinister and power-mad,” the lack of similar criticism of Josef Stalin, and the address being “full of generalities […] with a few statements that bordered on the ridiculous here and there.”

Less than two months after Kaltenborn’s speech in Salt Lake City, millions of Americans across the country tuned in on December 7, 1941, to hear his analysis of the attack at Pearl Harbor, which heralded the United States’ entrance into WWII (National Broadcasting Company, Inc.). The timing of Kaltenborn’s speech, his outspoken position on the war, and the media coverage before and after the event provide a great insight into the contemporary arguments for and against entering the war and can help to better understand the political landscape of Utah concerning the war prior to Pearl Harbor.

Anthony Scoma is a senior at the University of Utah majoring in communication and political science and is set to graduate in May 2019. He is interested in radio journalism and is the podcast producer for K-UTE Radio.

Liebovich, Louis. H.V. Kaltenborn and the Origins of the Cold War: A Study of Personal Expression in Radio Journalism History, no. 14 (Summer/Autumn 1987): 46–53.