There are currently many ways to learn another language. Software like Rosetta Stone is neither a new nor astonishing technology to most of us, and apps like Duolingo and Babbel are making language learning even more accessible to all. It could be said that it is the easiest time to learn a new language because of all of the technologies available to us. But that was not always the case.

Before the availability of language learning technologies, people who were not able to learn through immersive experiences relied on traditional learning methods such as classroom instruction and literature to guide their education. But, Thomas Edison’s invention of sound recording and Alexander Graham Bell’s revolutionary creation, the phonograph, changed everything. And during the turn of the 20th century, a smart Russian immigrant capitalized on those technologies and developed the method that modern technologies still use.

Advertisement for the Linguaphone, with coupon for GIs, featured in an April 1949 edition of Popular Mechanics.

In 1901, Jacques Roston immigrated to London and founded The Linguaphone Group. Roston, a translator and language teacher, believed in “the primacy of the spoken word.” (“Our Heritage,” 2018) He theorized that the best method to teach students a new language—if they were not able to immerse themselves into the culture in which it is spoken—was to utilize the new sound technologies to record native speakers and play that back to students alongside the Rees Pictorial Language books. (“Our Heritage,” 2018)

By 1920, sound recording technology had time to mature and was refined. The traditional wax cylinder became the phonograph record—more commonly referred to as the vinyl record. This innovation in the technology made it so more and more people around the world had access to phonographs and records, and again Roston saw an opportunity. He pursued an aggressive print ad campaign in many countries and by the end of the decade, the Linguaphone Group’s programs were taught in 92 countries. Lessons were available in French, German, Italian, Spanish, English, Afrikaans, Esperanto and many other languages. (“Our Heritage,” 2018) Ads for the Linguaphone can be found in many local Utah newspapers including The Utah Chronicle, Salt Lake Tribune, Provo Daily Herald and Ogden Standard-Examiner.

On a national level, Roston and the Linguaphone Group pursued major ad campaigns in magazines like Popular Science and Popular Mechanics. The ads featured in the various newspapers and magazines were all very similar, with slight variations in the illustrations and language. Some, like the ads featured in Popular Science and Popular Mechanics, included coupon cutouts that gave any active or retired GI the opportunity to receive a free Linguaphone set for their service. Interestingly, the ad featured in The Utah Chronicle from the same time period did not include the coupon for GIs, even though there were many active service members who called the fieldhouse on campus home.

The ads encouraged readers to try out the revolutionary language learning product that provided an easy way to learn, right in the comfort of one’s home, a very innovative concept at the time. One Salt Lake Tribune ad from 1943 said, “Save time, work and money. With a Linguaphone set at your side you can study anywhere anytime at your ease, alone or in a group.” It was available to purchase from the Deseret Book Store. Another ad from a 1949 edition of Popular Mechanics details the educational value of the product. “Educators hail Linguaphone as a notable advance in simplifying the mastery of languages. That is why so many Linguaphone Sets are used in schools, colleges, universities, as an aid to fluent speaking.” 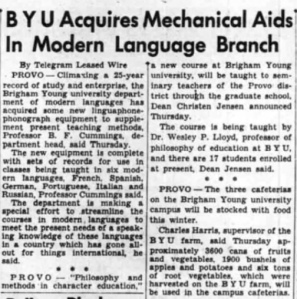 Article from a November 1943 edition of the Salt Lake Telegramdetailing the use of the Linguaphone by the BYU language department.

According to a 1943 Salt Lake Telegram article, the language department from BYU had “acquired some new linguaphone-phonograph equipment to supplement present teaching methods,” and the product aided in the instruction of French, Spanish, German, Portuguese, Italian and Russian at the school. An Orem-Geneva Times article from the same time period mentions that students from Lincoln High School in Orem purchased a Linguaphone set to be used in their newly created foreign languages club. Classified ads can also be found in many newspapers, like one in The Salt Lake Tribune from 1944, where the seller is offering a Linguaphone set in exchange for a “good portable typewriter.”

Roston’s methods of teaching languages with the assistance of sound technologies was groundbreaking at the time and helped many across the world, including government officials, diplomats and even dignitaries, learn new languages. (“Our Heritage,” 2018) Roston theorized that by using the sound of native language speakers, alongside images and text that illustrate the corresponding word, people were better suited to learn a language. “With the aid of these pictures you learn to associate the appearance of things with the appropriate word sounds. This is the truly natural way of learning a language, a way you first, as a child, learned your own mother tongue,” Roston said in a 1927 ad in The Linguist.

As the method proved to be very effective, it continued to grow in popularity. Author H. G. Wells prophesized at the advent of the phonograph that it would be used to teach language in the future, and was pleased when the Linguaphone Group fulfilled that prophecy. He wrote to Roston “expressing his admiration for Linguaphone’s work.” (“Our Heritage,” 2018) Even the top linguists of the day were praising Roston for his innovations in the teaching of language to the masses of the world.

Eventually, the use of Linguaphone’s teaching methods became so common that the product entered popular culture. According to Wilfried Decoo, it was included in the 1964 film My Fair Lady. A scene shows Professor Henry Higgins using the method to teach Eliza Doolittle proper English. (Decoo, p. 9) Interestingly, a 1967 ad found in the Ogden Standard Examiner alludes to the growth and popularity that the product had undergone in the previous decades stating, “Thousands of students, travelers, teachers and businessmen have already mastered other languages [in] this natural way.” And, by the mid-1940s, the peak of the company’s reach, 40,000 students were using the linguaphone to learn a new language on a monthly basis. Even the US military used the program to teach its soldiers languages during World War II.

The Linguaphone Group advertised extensively in national magazines like Popular Science and Popular Mechanics through the 1940s, and ads for the product can be found locally in The Utah Chronicle, Salt Lake Tribune, Ogden Standard-Examiner and Provo Daily Herald issues of the same time period. The company continued its tradition of technological adaptation throughout the next few decades; the phonograph record became the cassette tape, which became the CD, which finally evolved into the modern MP3. The Linguaphone Group still operates today and is still teaching lessons in 15 different languages.

Diego Romo is a senior at the University of Utah. He is studying communication with an emphasis in journalism, and a minor in political science.

Advertisement for the Linguaphone, The Utah Chronicle, November 09, 1944, 09.

“Our Heritage,” The Linguaphone Group.