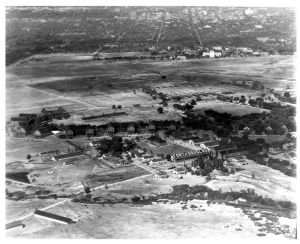 World War II ushered in a time of radical change for the United States. Men and women went to war by the thousands and those who stayed home were forced to pick up the slack. The end of the war in 1945 was a relief for millions around the world, but the change was sudden and drastic and many had a hard time adapting. Universities across the country had to work especially hard to adapt to a post-war world. On June 9, 1944, the Progressive Opinion reported that “our own school system faces one of the greatest crisis in its history and, likewise, some of the greatest changes.” Elinore H. Partridge explains in the article “A. Ray Olpin and the Postwar Emergency at the University of Utah” that these changes were based mostly around two events that were tied to the end of World War II. GIs were coming home and looking for an education and all the teachers had either gone to war or switched to a more financially sustainable job in the war industry. (p. 197) Though the changes were swift, the University of Utah was not caught off guard. Plans had already been made and policies set into motion.

By the early 1940s, the University of Utah had adapted greatly to a nation committed to the war effort. Salt Lake City newspapers reported on the university’s wartime transformation. The Salt Lake Telegram reported on December 31, 1943, that “already more than 1,000 young men in khaki are pursuing studies designed to prepare them as efficient cogs in a war machine.” Yet, even as women and men left for the war, those who remained behind began to plan for the future after the conflict.

On February 15, 1944, The Salt Lake Telegram reported that “a postwar planning council for Salt Lake City to ‘Integrate effort and coordinate a multiplicity of plans’ was approved.” The Utah Chronicle reported on September 21, 1944, that Brigham Young University would hold a conference on postwar planning for the “representatives of Utah’s institutions of higher learning.”

The University of Utah hosted similar discussions on postwar planning which were announced in the Utah Chronicle. For example, the paper reported on April 20, 1944, that “the school of business is doing its post-war planning by charting new courses for returning soldiers and by discussing their plans with downtown businessmen and government officials.” The University of Utah even helped to draft resolutions to send to their state representatives, the Utah Chronicle reported on May 5, 1944. According to the same article, “The resolutions had been discussed by the State College of Washington” and were then amended after being discussed at a public meeting at the University of Utah. Steps like these demonstrate how the University of Utah was committed to finding the most efficient way to navigate these trying times. 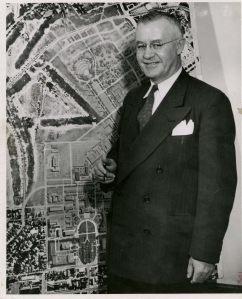 The problem wasn’t just with the number of new students either. According to a May 1944 article in the Progressive Opinion, a newspaper published in Salt Lake City, “American schools have lost 200,000 competent well-prepared teachers since Pearl Harbor.” With too many new students and not enough teachers, a downgrade in the quality of higher education in Utah looked inevitable. But Utah met these problems head-on.

The University of Utah went to great lengths to accommodate new students, especially veterans, under the leadership of president A Ray Olpin. A lot of the time these vets had families and current student housing was too expensive. According to Partridge, “Olpin and his staff worked throughout the spring of 1946 to acquire family-dwelling units. By summer, after countless telegrams between Olpin and United States Senators Abe Murdock and Elbert D. Thomas, 301 family units were moved in to place to form an instant community.” (p. 197)

World War II brought about changes at institutions around the world and the University of Utah was no exception. The University planned for and then reacted to the end of the war with the power of intellect. This chapter in the school’s history demonstrates the value institutions of higher education can have to their communities. They are places where ideas are born and plans are executed.

David Miller is a student at the University of Utah. He is planning on graduating in 2020 with a double major in communication and psychology.