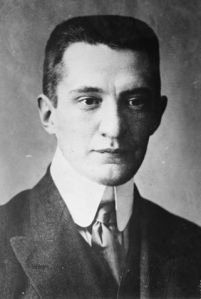 Alexander Kerensky led the beginning of the Russian Revolution. He was a lawyer who pioneered the first wave of the Russian Revolution in the year 1917. He was noted as a very influential political leader in Russia and spent many of his later years traveling to other countries and states to give informative and educational speeches about policy and influence in the political system. (Whitman)

Alexander Kerensky made one of his stops at the University of Utah campus to give a speech to students, faculty and the general public about his experiences as a political leader. Kerensky, during a two-day visit to Utah, discussed “Russia and the International Situation.” Kerensky also held meetings for faculty members and students to answer questions and further discuss other topics related to the Russian condition. Kerensky was president of the Russian Democratic Provisional Government. (Utah Chronicle)

Alexander Kerensky would travel all across America teaching the general public of Russian policy and international affairs and discuss briefly of his time spent pioneering the revolution in 1917.

Kerensky at the National Press Club in 1938. Public domain.

After many years of war and despair among the Russian people there, Kerensky was able to give a vision of sight to the people of Russia escaping political turmoil and senseless violence that ensued. The Russian people celebrated on Easter Sunday, April 15th, during one of the most religious holidays for the Russian people. This signified a new era of hope and renaissance for the future generations of the Soviet Union. (Frazier)

However, it wasn’t an easy transition from war to peace, the people of Russia battled internally whether or not they will be safe from the tyranny of war. Debates of whether Russian was going to stay into the war invoke a response in the Russian Government. A telegram was sent out depicting that the war efforts will continue with all of the given treaties at hand. This telegram broke out to the public and the trust of the Russian Authorities was no longer intact, until the forceful resignation of the war minister and foreign minister.

Kerensky did not have 100% support of all people, and even had some rather outlandish ideas about communism causing the death of millions of people in Russia. He believed that concentration camps would be utilized to demolish a great number of innocent people. (Safire)

Kerensky eventually became the new Supreme Commander of the Russian Army. However, throughout his political career, he continued to support the war efforts being made which again made him considerably unpopular among his people. He ultimately decided that he needed to gain the leftist support so he rebranded his platform by including more socialists and more Mensheviks revolutionists. This was an unsuccessful attempt and never gained control or support of his people. (Simkin)

Frazier, Ian. “What Ever Happened to the Russian Revolution?” Smithsonian, October 2017.