Robert Frost, born in San Francisco, is best known as a New England poet — writing about quintessential rural American themes based on direct observations, according to his obituary in the January 30, 1963, edition of the New York Times. Success did not come quickly to the now-celebrated poet. The piece tells of the 20 years of writing and various jobs he busied himself with in the time before “A Boy’s Will” was published in England, 1913. Following Ezra Pound’s support of that publication, the path to recognition cleared and Frost began to teach again, lecture for audiences across the nation, and ultimately was awarded the Pulitzer Prize four times. (New York Times, 1963) 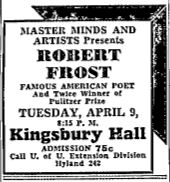 An advertisement that appeared in the April 5, 1940, issue of the Salt Lake Telegram.

It was during one of his lecture tours when Robert Frost found himself in Utah for a series of talks along the Wasatch Front. The Salt Lake Telegram reported in April 1940 that Frost first spoke in Logan the day before his April 9, 1940, University of Utah appearance and would be traveling to speak at the Provo Tabernacle the day after.

A Boy’s Will, North of Boston, Mountain Interval, New Hampshire, and West Running Brook were a few of his most popular works at the time, as reported in a March 28, 1940, issue of the Daily Utah Chronicle.

The Daily Utah Chronicle also noted this lecture marked the ninth and final event of the 1939-40 Master Minds and Artists series in its April 11, 1940, issue. Kingsbury Hall was scheduled to host the audience of students and members of the public alike that Tuesday, where Frost would regale them with “A Poet’s Outlook on Life,” described the April 9, 1940, copy of the Salt Lake Telegram. This article also revealed that the university extension division sponsored the program. (Salt Lake Telegram, 1940, pg 24)

On April 3, 1940, the Daily Utah Chronicle wrote that Mr. Frost was considered “one of the country’s most eminent contributors to the world of literature.” Being able to hear the poet tell his own story, from rural life, to personal stylistic choices, to his musings on academia surely would have been a treat. 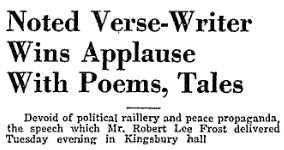 Indeed it was, for his “shrewd wit and good natured fellowship” garnered many laughs and claps from the full crowd. (Salt Lake Telegram, 1940, pg 20) Frost was quoted saying “he never bothered be radical when young for fear it would make him conservative when old,” in the April 11, 1940, issue of the Daily Utah Chronicle. This quote, the article reports, brought about a fit of laughter from the audience. In addition to slightly slandering philosophers and commenting on colleges, the April 11, 1940, Daily Utah Chronicle column ended by saying Frost read a selection of his short poems — The Road Not Taken among them.

In April 1940, Robert Frost spoke at the University of Utah. While his lecture brought laughs to those listening, it also left a legacy. Knowing that such an influential writer visited Salt Lake City is an amazing bit of history that seems to not have been researched and written about much since it happened. However, it shows that the U was influential enough to be able to coordinate such a visit.

Bringing speakers with diverse backgrounds to campus is a trend that has continued to today. Hearing people with upbringings that maybe aren’t so different from our own creates a richer perspective, even more so for university students about to bring their own knowledge into the world. Robert Frost, like other artists with such caliber, can speak to the human experience while enlivening their own works and enriching our lives.

Morgan Parent graduated from the University of Utah in 2019 with a Bachelor of Science degree in communication. She’ll be relocating to the Pacific Northwest in 2020 to pursue her next great adventure.