University of Utah Men’s Basketball started with more of a whimper than a bang at the University. According to Jason Hansen’s Utah Basketball A History of the Runnin’ Utes Since 1908, the Men’s game was born in 1908 while women’s basketball made its debut in 1897. It was proposed that a men’s team be started in 1901, but a fire on campus had prevented the men’s team from participating. Hansen wrote that the first season at the U was “a rough one,” as the team ended up going 3-8 in their first season. (pp. 15-16)

However, after that first season the Utes developed winning ways, according to Hansen. In their second season the team’s record was  17-3. After that the Utes would not have a losing season for the next 12 years, according to Hansen. Fast forward about 40 so years to the era of Utah Basketball head coach Jack Carpenter. Here we find on his teams from 1957-1961 a forgotten basketball legacy at the University of Utah: Jim Rhead.

Three years after Jim Rhead left the Utah basketball program, the University of Utah would complete its dramatic fall with a last place finish in the Western Athletic Conference in the 1964-65 season. The school’s in-conference record would be a bad 3-7 mark and the team would finish with a 17-9 record overall, according to Mike Douchant. (p. 121) A bit more internet digging shows that the year after Rhead’s 1960-61 senior season, the team went only 5-5 in the Western Athletic Conference play and 12-14 overall, according to sports reference.com. However, in 1965-1966 the Utes went to the Final Four, according to Douchant. Rhead went to a final four in his senior season, yet has become a forgotten figure in Utah basketball lore.

The earliest event in Rhead’s basketball career places him playing with the South High Cubs, as reported by  the Tremonton Leader. In the game Rhead scored 19 total points, most of them coming from around the free throw line off jump shots. Despite this the South High Cubs, called a “powerful” team by the Tremonton Leader, ended up losing the game. That was at the beginning of the 1956-57 season, Rhead’s senior year. In a later issue of the Murray Eagle in 1957, Rhead is said to have “[r]etaliated with two ringers and a brace of free flips in the next three minutes to make it 6-2.” Rhead recorded a total of 17 points in the game in just 21 minutes of total time played as the Cubs defeated the Murray Spartans 61-25. Rhead was an all-state performer at South High School, which closed in 1988 and now houses Salt Lake Community College’s South Campus (Media Guide; Deseret News) 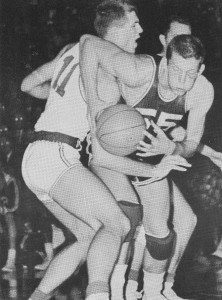 According to the 1959-1960 Media Guide, Jim Rhead entered his junior season at The University of Utah in 1959. So, it can be surmised that Rhead’s Utah career started in 1957 when he entered the university as a freshman. In the Media Guide Rhead is listed as a 6’4” 208-pound forward. According to the Media Guide, Rhead had a decent sophomore season at Utah. “Jim had a great year as a Sophomore. He was the club’s fifth leading rebounder and this despite the fact he was not a starter. You can’t outmuscle Rhead under the boards.” The guide then mentioned the fact that Rhead averaged 7.1 points per game during his sophomore season.

According to The Daily Utah Chronicle, April 18, 1961, Rhead had quite the prolific senior season with the Utes, averaging 12.7 points a game and shooting 48 percent from the floor. These are impressive numbers from a power forward like Rhead, even by today’s standards. Most impressively, he averaged almost 10 rebound per game his senior year. Rhead’s senior year was a massive success, Douchant writes in his Encyclopedia of College Basketball, as Rhead and the 1961 team made it to the final four. Rhead finished 7th all time in single season rebounds with 321 in the 1961 season, according to statistics provided by University of Utah Athletics.

After his time at the U, Rhead played for a Utah Amateur Athletic Union team. The March 29, 1962, edition of the Provo Daily Herald noted that Rhead and former Utah star Billy McGill both scored 17 points in a win for the team. According to The Murray Eagle, Rhead was part of a Utah AAU team scheduled to play in a tournament from March 6 to March 8.

Rhead was a key member of the 1961 Utah final four team and has somewhat been forgotten by history. His numbers even today are comparable to current Utah starting power forward, Timmy Allen, who in 2018 scored 12.2 points a game but only averaged about half of Rhead’s rebounds at 5 a game, according to ESPN.

Eric Jensen is an undergraduate student at the University of Utah studying communication and journalism. He plans to graduate in 2022.