Professor Snarf telling students about the one book they will need to purchase for the course. Cartoon by Richard Bibler from More Little Man on Campus. Published 1957 by Bibler Features. Use in the public domain.

If you ever picked up a newspaper as a kid, the first thing you probably flipped to was the cartoons. Popular types of cartoons in newspapers include political, illustrative, gag, comic strip, and animated cartoons. The themes and jokes displayed in these cartoons are determined by the artist, with each artist showing their own style of humor and illustration. One artist who has a unique style is Richard “Dick” Bibler.

Bibler’s jump-start as an editorial cartoonist began as a freshman at the University of Kansas. Part of the class of 1946, Bibler could be found in the infamous quarters of Oread Hall. Oread Hall originally served as an army barracks but got transformed as an affordable housing unit for students. Oread Hall was known for its tight quarters and lack of air conditioning. Residents called it a “tinderbox.” (McCool) Maybe not the grandest of living spaces, but it was perhaps the perfect environment for Bibler to rub shoulders with his fellow classmates. This first-hand experience explains Bibler’s attention to detail to student life in his illustrations.

Bibler’s cartoons focused on themes familiar among college students. Published in over a hundred campus newspapers, Bibler’s “Little Man on Campus” (LMOC), quickly became a popular cartoon at universities by 1951. His cartoons follow the young and reckless “Worthal” and seemingly evil “Professor Snarf.” Bibler told The Word newspaper on November 3, 1967, that the University of Utah was among the first universities asking to publish his work on the campus newspaper, the Daily Utah Chronicle.

Although Bibler’s LMOC is no longer published in the present-day campus newspaper, his work is still relatable to today’s college students. Students and graduates alike flipping through the LMOC cartoons can relate to the character “Worthal” for his nervousness before tests, his silly pranks, and his perseverance as he goes through college. Readers can also relate to and identify their own “Professor Snarf”: the scary professor whose class seems impossible to pass, and the student’s favorite teacher to prank. As Bibler said in an interview with Morris Arden (Little Man, What Now?) about the character “Professor Snarf,” “every college has a ‘Snarf’ and if you don’t believe me, ask some of my students.” 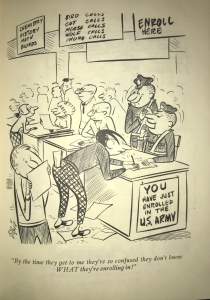 Worthal enlisting in the army. Cartoon by Richard Bibler. Use in the public domain.

Colleges and universities like North Carolina State College, Boise Junior College, Boston University, and the University of Miami have all shared their admiration for the series. The previous editor of the University of Miami Hurricane newspaper, John Garcia, said, “LMOC has contributed something different to the university and college campuses. He has been well received by the students…. Little Man has become a legend.” (Little Man, What Now?) With Richard Bibler’s death in 2013, it is important that we keep his art and humor alive today. The cartoons serve as a memento of the past as well as the present of the college social experience. For all the endless laughs and smiles we celebrate Richard “Dick” Bibler.

Roberto Elguera is a senior at the University of Utah, majoring in communication with an emphasis in journalism.