Athletics have always been an important part of the university experience, and no sport has been more popular among universities than football. The University of Utah is now one of the top football schools in the country, but from 1948 to 1992, the football team struggled. The football team only participated in one bowl game during that time frame, the 1964 Liberty Bowl. The coach who was able to help the University of Utah to achieve greatness in the midst of those years of struggle was Ray Nagel.

On January 31, 1958, the Deseret News reported that the University of Utah had hired Nagel to become the new head football coach. He replaced Jack Curtice as head coach. It was a surprising hire for Utah because Nagel was only 30 years old at the time and considered very young for the position. The Deseret News described him on January 31, 1958, as, “personable, youthful” with a “boyish grin.” 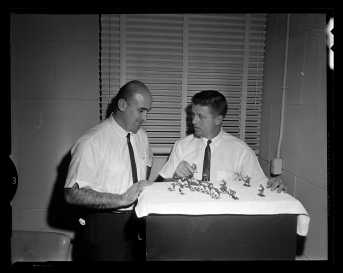 University of Utah head football coach Ray Nagel (right) diagrams a play with his assistant coach “Bullet” Bob Watson in 1963. Before working together at Utah, Nagel and Watson were college football teammates while playing for UCLA. Used by permission, Utah State Historical Society.

Prior to taking over at Utah, Nagel had been a player for UCLA, where he was an All-American honorable mention at quarterback. He also spent time as an assistant coach for the Chicago Cardinals, the University of Oklahoma and UCLA. He was serving as grid assistant for UCLA when he was hired by Utah as head coach, the Salt Lake Times reported on February 7, 1958.

One of the reasons Utah chose to hire Nagel was because he wanted to implement a new offensive system for the football team. The Daily Utah Chronicle reported on April 18, 1958, that Nagel would be running the straight “T” offense, which would be a slight change from the winged “T” that the team used in previous seasons. A former player of Nagel’s, wingback John Pease, would later recall to Matthew Piper of the Salt Lake Tribune on December 14, 2014, that Coach Nagel’s practices were like “street fights.”

However, Nagel was well liked by his players and by the student body. The Daily Utah Chronicle reported on November 16, 1962, that 35 students invaded Nagel’s home to “abduct” him and take him to the local television station, where the students read a letter proclaiming their loyalty to Nagel and the football team.

Nagel had moderate levels of success in his first six seasons as head coach for the university. The team’s record was 30-30-1 during those seasons. The Utes always won at least four games each season but never had more than seven wins in a season. (“Ray Nagel,” Sports Reference College Football) 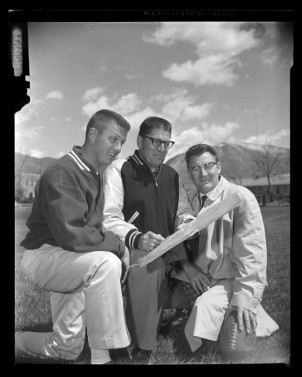 Coach Ray Nagel (left) supervises a University of Utah football practice with two of his assistant coaches. Larry Palmer (center) and Frank Klekas (right) were part of the coaching staff for the 1960 season. Utah would finish the season with a record of seven wins and three losses. Used by permission, Utah State Historical Society.

Things began to change for the Utes in 1964 as the team reached a previously unobtained level of success. The team success was based on a Nagel-led offense that the former players told Matthew Piper of the Salt Lake Tribune, “Had four run plays and about as many pass plays.” Utah went 8-2 during the regular season. The team’s only two losses came against Missouri and Wyoming. The 8-2 record was good enough for Utah to earn a share of the Western Athletic Conference title. It was also reported by the Daily Utah Chronicle on December 7, 1964, that Nagel had been named the Western Athletic Conference’s Coach of the Year.

At the end of the season, Utah was invited to participate in the Liberty Bowl against West Virginia. It would be the Utes’ first bowl appearance since 1948. The Liberty Bowl was to be played in New York on December 19, 1964. As the New York Times reported that day, it was the first bowl game to ever be played indoors, and the most expensive ticket for a bowl game ever to that point.

The Provo Sunday Herald would report on December 20, 1964, that Utah demolished West Virginia in the game, winning 32-6. The newspaper quoted Nagel after the game as saying, “This was our best game of the season. We got the jump on them and they couldn’t pick up momentum.” Ron Coleman was voted the game’s most outstanding back. Utah would not compete in another college football bowl game until 1992.

The 1965 season would be the final season with Nagel serving as head coach for the University of Utah. The Utes’ would go 3-7 during the season after losing much of the core that composed the 1964 team. At the end of the season, on December 12, 1965, the Spartanburg Herald-Journal would report that the University of Iowa had hired Nagel to become the school’s new football coach. This marked the end of Nagel’s tenure at Utah, where he finished with a record of 42-39-1. (“Ray Nagel,” Sports Reference College Football)

Nagel would coach at Iowa for five more years before retiring from coaching at the end of the 1970 season. His career coaching record would be 58-70-1. The 1964 football team that Nagel coached would be inducted into the Crimson Club Hall of Fame in 2014 in recognition of their Liberty Bowl victory that year. (“Crimson Club Hall Of Fame 2014,” Utah Utes Athletics) The Salt Lake Tribune reported that Ray Nagel died on January 15, 2015, at the age of 87.

Ray Nagel was one of the most successful football coaches the University of Utah had during the twentieth century. He helped lead the Utes to what would be the most significant win in program history up to that point at the 1964 Liberty Bowl. No other coach was able to reach the same level of success at Utah until the 1990s.

Aside from the financial impact, college athletics are also an important part of the culture and tradition of many universities. The University of Utah is one such university, and few coaches have obtained the level of success that Ray Nagel achieved. Fifty years have passed, but the 1964 Liberty Bowl team remains one of the defining football seasons for the university. This is evident by their induction into the Crimson Club Hall of Fame. As the University of Utah continues to strive for success in college football, it is important to remember the legacy of Ray Nagel. He achieved success at the University of Utah that has seldom been matched since his departure.

Ryan Larson is a junior at the University of Utah. He is double majoring in economics and communication with a journalism emphasis.