Margaret Ferron, upper left, and Dorothy Craig are examples of how World War II influenced women in certain fields of work. Ferron is seen here with her drawing board in the mechanical drawing lab while Craig is seen doing some “experimenting.” Used with permission, Special Collections, J. Willard Marriott Library, The University of Utah.

In 2019, according to the Office of Budget and Institutional Analysis at the University of Utah, there are a great number of people enrolled in engineering majors. However, there are large discrepancies in the numbers when comparing genders. At a pre-major level for instance, only 3,387 are women while men number 4,290, a whopping 903 person difference. That’s not the only area of difference. In every aspect of every engineering major, pre-major, to bachelors, to doctorate, men outnumber women. This difference is not unusual. The Daily Utah Chronicle has several articles as early as the 1930s talking about the novelty of women enrolled in engineering majors.

The professor and head of the electrical engineering department, Dr. L. D. Harris, was quoted in The Daily Utah Chronicle, November 17, 1961, stating, “We’ve had two women graduate in this field -— both in the 1930s.” In an earlier article it mentions the names of these two women listed as graduating from the engineering program, Dorothy Blades in 1924 and Mary Frances Plumb in 1934 in The Daily Utah Chronicle, November 27, 1935.

Even by 1961, 31 years later, only one or two women decided to take on the challenge of entering the engineering field as stated in The Daily Utah Chronicle, November 17. This article will explore the women who penetrated these fields and how their position as women in engineering fields was treated.

Each of these women have their own reasons for entering the field and their own opinions about women in engineering. 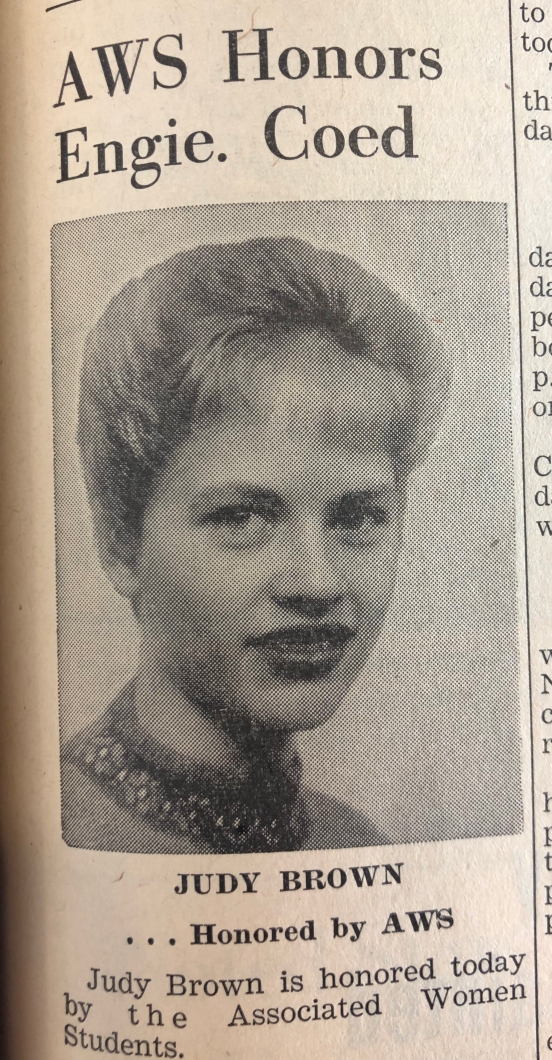 Judy Brown was honored for her achievements in her field of civil engineering by the Associated Women Students. She was one of only two women enrolled in engineering fields. Used with permission, Special Collections, J. Willard Marriott Library, The University of Utah.

A senior in civil engineering, Judy Brown, was a transfer student from the University of Wyoming and used to being the only girl in her classes. She continued as the only woman registered in upper classes in any field of engineering at the University of Utah and was eventually honored by the AWS or Associated Women Students, reported The Daily Utah Chronicle on November 16, 1961, for her accomplishments in her field of study and her 3.92 grade point average.

Despite being told on her first day that the “Frosh English class was across the hall,” Brown laughed. “They finally decided that maybe I belonged.”

Margaret Ferron was highlighted in The Daily Utah Chronicle, February 25, 1943, and chose to enter engineering because it was a family affair.  She said that despite what others believed she was not in the field for attention or to find a man. “My father happens to be an engineer, and so are my two brothers; in fact, I just come from an engineering family, and I decided to carry on the tradition.”

Ferron added, “There’s a lot of prejudice against women engineers at the present time. But I think it will be all dispelled as the war makes it more and more necessary for women to be trained to take the place of men in the engineering field.”

According to The Daily Utah Chronicle, November 27, 1935, Opal Cummings age 16 was the only girl registered in any field of engineering at the University of Utah at that time. A graduate of local West High School, she believed that “women are just as well qualified as men in engineering.”

Each of these women have a story, and represent part of an even bigger story still being told. Women have certainly increased their presence in the workplace since the early to mid 1900s, but the trend of males dominating in engineering fields continue.

Some claim it’s because of the lifestyles women lead, with many choosing to have children or raise a family, lifestyles that are not as conducive to having such an intensive major and job. According to an article in the Salt Lake Tribune in June 2013, “Far fewer women study STEM fields at Utah colleges -— just 12% of engineering degrees … go to women.” However, even the language of the articles portrays a difference of societal expectations, as seen in The Daily Utah Chronicle, November 17, 1961, which focused on how the female students would still “find a husband.” It’s hard to tell how much of this large gap in numbers is because of sexism and oppression or if it’s simply the result of a different culture and expectations. But one thing is for sure, these early women who were willing to push beyond any barriers in engineering fields have paved the way for women to come.

Eliza Jane Pace is a sophomore at the University of Utah, majoring in communication with an emphasis in journalism and a minor in music.

“Is Engineering for Males Only? Nope! Ute Coeds’re In,” The Daily Utah Chronicle, November 17, 1961.

Office of Budget and Institutional Analysis, The University of Utah.