Skiing serves as one of Utah’s main forms of recreation, and locals believe the state possesses “The Greatest Snow on Earth.”  However, mass public skiing wasn’t always readily available to Utahns. In the fall of 1938, the development of Alta, what is now known as one of the most elite ski resorts in the world, began. Within a decade, Alta had become a nationwide attraction. The story of how Alta came to be is quite remarkable, and certainly imperative to the growth of one of Utah’s most coveted historical pastimes.

Before skiing in Utah reached mass popularity, it was used as a means of travel throughout Utah’s rugged mountain terrain. According to A. Joseph Arave, the first Utah skiers included trappers, miners, and others who relied on skis as a means of transportation. Gradually, it became a recreational activity for those looking to tour the mountains and by the late 1920s, these tours, as well as ski-jumping meets, began to attract thousands of Utah residents. Due to the growing interest and demand in skiing, several small ski areas were developed using simple tow rope and T-bar systems. All the while, The Alta Winter Sports Association was building Utah’s first ski lift and what would eventually become one of Utah’s finest ski resorts.

The New York Times reports that after Alta was destroyed by fire and avalanches in the early 1900s, the lone resident of the town was the self-declared mayor George Watson. Watson agreed to give 1,800 acres of land to the United States Forest Service. With the help of Watson and the Forest Service, the Association was able to obtain land to construct the resort. The Association raised $10,000 in order to construct the lift, and was able to obtain a permit to construct the chairlift in the fall of 1938. An aerial mining tramway was then purchased from a pair of mining men, and the Association converted the machinery into a lift. It was named The Collins lift and it scaled the mountain a total of 2,740 linear feet. 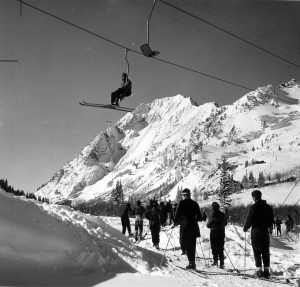 After the success of constructing Utah’s first operational lift, Alta’s popularity skyrocketed. New lifts were constructed in the early 1940s, and while many ski resorts nationwide shut down throughout the duration of World War II, Alta remained open and offered recreational relief to soldiers based in Utah. The Utah Chronicle reported on February 6, 1941, that University of Utah students were able to take tri-weekly bus trips sponsored by the student ski club to the resort. As Alta began to expand year after year, so did the number of visitors. According to Anthony Will Bowman, between 1964 and 1965, over 230,000 visitors went to Alta between the months of December and April.

As ski resorts have become Utah’s largest tourist attraction, as well as one of the state’s most profitable industries, Alta Ski Resort still possesses some individuality among other local resorts such as Park City and Canyons Resort. Alta is one of only six resorts in the National Ski Area Association where snowboarding isn’t allowed. Alta has also stuck to fundamental values of skiing, focusing its efforts on providing a quality skiing experience on unmatched terrain, rather than selling out for profit or joining a massive corporate conglomerate. This refusal to adapt has allowed Alta to preserve its integrity and remain the most historical ski resort in Utah.

Lorenzo Pighini is a Chicago native majoring in communication and minoring in business at the University of Utah. He moved to Utah to pursue an education and to experience world-class snowboarding.