Education is an important factor in how individuals pursue and achieve their academical goals. It is also significant as it contributes and creates a path for students to succeed. However, education at a higher level, specifically college, is not affordable by a majority of people in the United States. College education can be broad, offering degrees from arts, engineering, and language to many other areas. It is a community and space where students understand their academic purpose. Although education is accessible, it is only obtainable through tuition payments, which cover fees and courses. Having the desire to pursue an academic goal through attending classes, covering other expenses such as school fees, books and supplies is highly important as well. As these create and ensure that students obtain and have a successful educational experience. 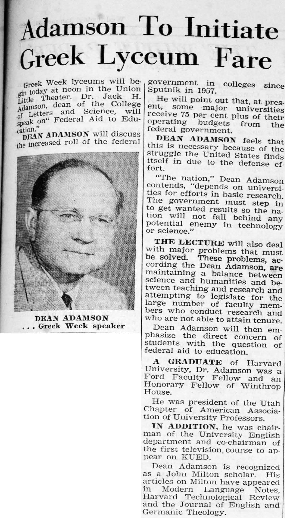 Dean Jack H. Adamson, pictured in a January 1962 issue of The Daily Utah Chronicle, was a guest speaker during the Greek Lyceum fair.

To this day, however students struggle to finance their education careers. In fact, a majority of students enroll in a university or college through financial aid, scholarships, private loans and at times with personal life savings. Federal funding programs such as financial aid, offer scholarships, Pell grants, and loans to students who struggle to pay tuition rates from their first year of school to their graduation expected date. This funding is available for students after they complete and process an application that requires a background check in their yearly income, filling out family information and submitting official documents. Students who then qualify are able to afford and pay for tuition each year through the available funds that the program offers for each individual. Numerous universities all over the United States also provide scholarships for incoming and enrolled students. However, not all students with an ambition of pursuing a college degree can afford tuition or qualify for local, school or private scholarships.

In 1962, through the Greek Lyceum fair on campus at the University of Utah, the idea of increased role of the federal aid in colleges was presented by Dr. Jack Adamson. As the Dean of the College of Letters and Science, Dr. Adamson, discussed with students at the time about the significance of funding programs focused on science, engineering and technology. Particularly, after Sputnik in 1957. The Sputnik Satellite was created by the Soviet Union, and it demonstrated that the Soviet Union was highly in advantage through its technology programs and innovations, in contrast to the United States. Creating a concern on how the United States was focusing federal funding, specifically for education purposes. Through this discussion at the University of Utah, Adamson created awareness and students were able to understand how important it was having fund directed to science, engineering, and technology. If funding was not being granted to programs in colleges, how was the United States going to advance and make progress technologically in the world? In other words, Dean Adamson highlighted the necessity of universities to obtain federal funding to budget research, teaching, and federal aid for students.

The Daily Utah Chronicle reported in January 1962 that Dean Adamson, emphasized the importance of having “a balance between science and humanities and between teaching and research.” Through this lecture, Dean Adamson provided an understanding of the United States’ educational and technological developments, however this lecture presented the idea that the United States was becoming a less potential power in technology compared to the Soviet Union. As federal funding was not being focused towards technology and science in Universities. Students, then understood that federal funding was necessary to improve programs and allow other individuals to attend and enroll in university and pursue degrees in engineering, science, and technology.

Article published in an October 1957 issue of The Daily Utah Chronicle.

The conversation introduced the technological development of the Soviet Union, the Sputnik Satellite from 1957. This topic was mentioned all over the United States, as it was one of the examples and advancements that presented the concerns and lack of budget to education. Alvin Powell published an article in the Harvard Gazette, on October 11, 2007 regarding the Sputnik Satellite and its importance to the educational path of the United States. “The United States may be overdue for a science education overhaul,” wrote Alvin. (p. 1) The Sputnik satellite was a technological advancement that demonstrated the development and importance the Soviet Union had towards technology in comparison with the United States in 1957. In this case, it was then given that the United States had to enact and work on a type of reform to fund educational research regarding science and engineering if it wanted to continue as a world potential power. And in response to the problematic educational crisis, the United States enacted the National Defense Education Act in 1958, which according to Powell, “increased funding for education at all levels, including low-interest student loans to college students, with the focus on scientific and technical education.” (p. 1)

As the conversation towards education increased with the controversy of the Soviet Union being the superior power in technological advancements, it was then noted that the funding for educational research and tuition was lacking. The University of Utah, during the Greek Lyceum lecture of Dean Adamson, presented findings according to the budget in 1962. Charlotte Garff, editor of the Daily Utah Chronicle in 1962 from Adamson’s lecture, wrote that “79 percent of the total U.S. budget is allotted for defense.” in an article published in February 1962. This amount and data presented in the lecture introduced the real budgeting the United States had towards other federal government programs comparing to education. Garff also presented how Dean Adamson emphasized that if the United States wanted to survive as the best potential power through the war crisis, it required the best programs and research or “the group with the best trained intelligence will win the cold war.”

Although education has been considered important to achieve success, it became a highly important factor for the United States to work on developing a technological era back in 1957. This movement, aside of budgeting programs focused on science, technology and engineering, opened new doors to other degrees as it introduced the federal funding programs towards education. The Soviet Union challenged the moral values and resources the United States had focused on research, and it created a breakthrough for future research, universities and education as a whole. The United States acquired the initiative and funded more educational programs over the nation. Discussions such as Dean Adamson’s lecture at the University of Utah, advocated and informed students and colleges on how valuable it was to have federal aid towards programs and student tuition. Federal funding has been providing a path to education for students for all majors and interests. Which creates opportunities for students to enroll and attend school and invest their educational careers in developing the technological future of the nation.

Michelle Saucedo is a senior at The University of Utah. She is majoring in communication with an emphasis in journalism and minoring in Spanish.