The United States is known to be one of the countries that still continues capital punishment. The incarceration rate in America is 15 times higher than that of other developed countries. (The British Journal of Criminology, p. 97) It seems like the justice system is carrying out its purpose well, punishing those who need to be punished. However, unlike our expectation, there are findings that show races of convicts impact the outcome at the court. In other words, races of the convicts can lessen or increase the sentences when only the actions need to be considered. (The British Journal of Criminology, p. 97) Such tendency is thought to be shown in a juvenile’s case back in 1962 at Jesse M. Garcia’s trial.

Letters to the Editor of The Daily Utah Chronicle debated Garcia’s death-penalty sentence.

Jesse M. Garcia, a Mexican-American boy, faced his trial at the age of 16. While growing up, his life was full of sadness. His family was so poor that they had no food to comfort themselves. Young Jesse would always fall asleep wondering when he could eat something again. His parents were busy and so there were no adults to keep him safe and stable which lead to an unfortunate accident. (Daily Utah Chronicle, 1962) As reported by the Daily Utah Chronicle on February 14, 1962, Jesse was running after a bouncing ball that unfortunately went toward his baby niece who was on a couch. Jesse jumped on the sofa, not knowing she was there. His niece was seriously injured and taken to the hospital, where she later died. The accident could have been prevented if there were adults at home. At that time, the occurrence was dismissed as the accident was thought to be unintentional. However, many years later, when he got involved in his biggest trouble, this tragic accident was brought up again saying that the accident may have been intentional.

Jesse Garcia faced his biggest trouble when he got involved in a murder case that occurred on August 24, 1958. The Daily Utah Chronicle reported on February 15, 1962, that an inmate was found to be attacked and brutally murdered in a prison attic by other inmates. Due to this incident, the reality of life in prison was also revealed to the world. At the time, prisoners in the Utah State Prison could easily trade drugs, carry weapons, and inhumanely treat other inmates. As suspects of the brutal murder, three convicts were brought up, Jesse Garcia, Mack Merrill Rivenburgh, and Leonard Warner Bowne. The murder case was not handled thoroughly and the evidences of the murder were not clear. However, the press was only in a hurry to cover the shocking conditions of the prison, neglecting the important facets of the murder case. Bowne and Garcia continuously claimed of their innocence by mentioning the level of cruelty of their actions, and their lack of intention in the murder. But their claims were not considered. Eventually, Rivenburgh and Garcia were given death penalty whereas Bowne was sentenced to life imprisonment. 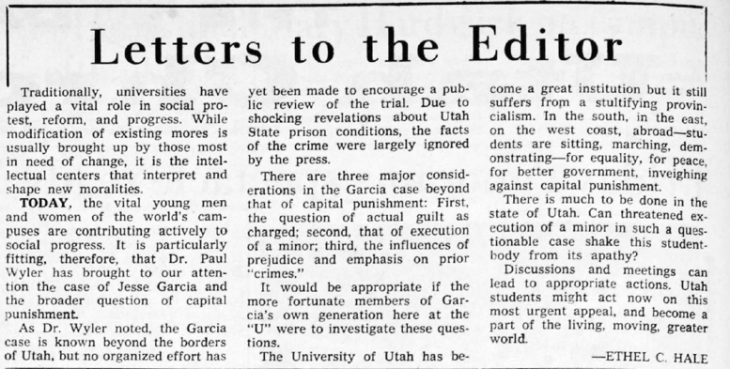 The Letters to the Editor section of The Daily Utah Chronicle illustrates students’ active engagement in a discussion of capital punishment.

On February 12, 1962, Daily Utah Chronicle reported that Garcia’s death became one of the crucial points in debate on capital punishment among those who believe capital punishment needs to be abolished. Garcia grew up in a very economically unstable environment. From an early age, Garcia had to struggle from a constant hunger and insecurity. Family wasn’t there to help him and serve as a buffer from the harsh world that Garcia had to face. His parents were too busy to take care of him. In such condition, Garcia got easily exposed to committing crimes which eventually led to a murder case.

On February 16, 1962, the Daily Utah Chronicle mentioned Garcia’s murder case from a racial perspective by comparing Garcia and Bowne. It was said that the stereotype on race brought different outcomes to the same crime. Garcia’s features as Mexican and growing up from an unstable background led the jury to think that Garcia has less chance of being rehabilitated than Bowne. On the other hand, Bowne was considered as a trustee while in the jail. It was reported that this may be because Bowne was a typical western boy with outstanding musical talent who grew up in stable background which made the jury see Bowne more favorably than Garcia. In other words, there may have been things other than the crime itself that punished Garcia heavily than Bowne. Without recommendation of leniency, Garcia was convicted of first degree murder. (The Salt Lake Tribune, 1962)

On Jesse Garcia’s case, people’s opinions vary. Some say that the case is an example of racial discrimination and that the legal process of the case should be analyzed critically. Others say the case was fairly handled as Rivenburgh, one of three convicts, was also given a death sentence despite of being white. It is still questionable whether Jesse Garcia’s sentence was justifiable. Given that Rivenburgh was penalized heavily, the idea that Jesse Garcia was fairly punished seems reliable. When it comes to trial and punishment, race can be a very sensitive topic to talk about. However, as long as America is full of people with diverse racial backgrounds, race is something that people will always talk about imposing suspicion on the fairness of the trial outcomes. Therefore, whether race factor was involved in past cases or not, to prevent any future cases from being impacted by the race factor, resolutions such as criminals’ right to avoid judges of certain races should be considered so that people would not get suspicious on the legal process.

June Sim is a junior at the University of Utah. She is currently majoring in communication with an emphasis in strategic communication.